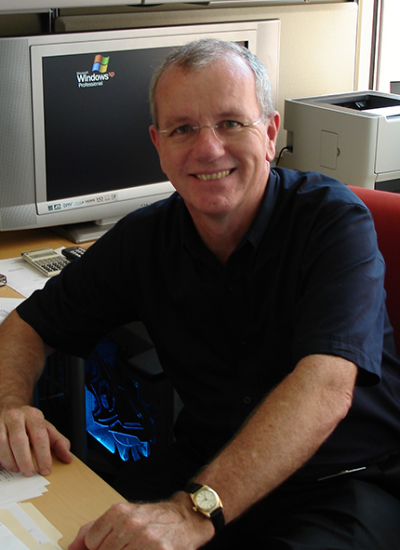 Professor, BIO5 Institute
Professor, Biomedical Engineering
Professor, Plant Science
Primary Department
School of Plant Sciences-Res
Department Affiliations
School of Plant Sciences-Res
BIO5 Institute
(520) 621-9153
galbraith@arizona.edu
Work Summary
I examine the molecular functions of the different cells found in the tissues and organs of plants and animals and how they combine these functions to optimize the health and vigor of the organism.
Research Interest
David Galbraith obtained undergraduate and graduate degrees in Biochemistry from the University of Cambridge, and postdoctoral training as a NATO Fellow at Stanford University. His first academic appointment was at the University of Nebraska Lincoln, and he became Professor of Plant Sciences at the University of Arizona in 1989. His research has focused on the development of instrumentation and methods for the analysis of biological cells, organs, and systems. He pioneered the use of flow cytometry and sorting in plants, developing widely-used methods for the analysis of genome size and cell cycle status, and for the production of somatic hybrids. He also was among the first to develop methods for the analysis of gene expression within specific cell types, using markers based on Fluorescent Protein expression for flow sorting these cells, and microarray platforms for analysis of their transcriptional activities and protein complements. Current interests include applications of highly parallel platforms for transcript and protein profiling of minimal sample sizes, and for analysis of genetic and epigenetic mechanisms that regulate gene expression during normal development and in diseased states, specifically pancreatic cancer. He is also funded to study factors involved in the regulation of bud dormancy in Vitis vinifera, and has interests in biodiversity and improvement of third-world agriculture. He has published more than 160 scholarly research articles, holds several patents, was elected a Fellow of the American Association for Advancement of Science in 2002, and serves on the editorial boards of Cytometry, Plant Methods, and Frontiers in Genetics, the latter as editor-in-chief of Frontiers in Genome Assay Technology. He is widely sought as a speaker, having presented over 290 seminars in academic, industrial and conference settings. Keywords: Plant and Animal Cellular Engineering; Biological Instrumentation; Flow Cytometry and Sorting

The nuclear DNA content of the whitefly Bemisia tabaci (Gennnadius) was estimated using flow cytometry. Male and female nuclei were stained with propidium iodide and their DNA content was estimated using chicken red blood cells and Arabidopsis thaliana L. (Brassicaceae) as external standards. The estimated nuclear DNA content of male and female B. tabaci was 1.04 and 2.06 pg, respectively. These results corroborated previous reports based on chromosome counting, which showed that B. tabaci males are haploid and females are diploid. Conversion between DNA content and genome size (1 pg DNA = 980 Mbp) indicate that the haploid genome size of B. tabaci is 1020 Mbp, which is approximately five times the size of the genome of the fruitfly Drosophila melanogaster Meigen. These results provide an important baseline that will facilitate genomics-based research for the B. tabaci complex. © CAB International, 2005.

One of the most important goals of biological investigation is to uncover gene functional relations. In this study we propose a framework for extraction and integration of gene functional relations from diverse biological data sources, including gene expression data, biological literature and genomic sequence information. We introduce a two-layered Bayesian network approach to integrate relations from multiple sources into a genome-wide functional network. An experimental study was conducted on a test-bed of Arabidopsis thaliana. Evaluation of the integrated network demonstrated that relation integration could improve the reliability of relations by combining evidence from different data sources. Domain expert judgments on the gene functional clusters in the network confirmed the validity of our approach for relation integration and network inference. © 2006 Oxford University Press.

Microarray data can be used to derive understanding of the relationships between the genes involved in various biological systems of an organism, given the availability of databases of gene expression measurements from the complete spectrum of experimental conditions and materials. However, there have been no reports, to date, of such a database being constructed for rice (Oryza sativa). Here, we describe the construction of such a database, called RiceArrayNet (RAN; http://www.ggbio.com/arraynet/), which provides information on coexpression between genes in terms of correlation coefficients (γ values). The average number of coexpressed genes is 214, with SD of 440 at γ ≥ 0.5. Given the correlation between genes in a gene pair, the degrees of closeness between genes can be visualized in a relational tree and a relational network. The distribution of correlated genes according to degree of stringency shows how each gene is related to other genes. As an application of RAN, the 16-member L7Ae ribosomal protein family was explored for coexpressed genes and gene expression values within and between rice and Arabidopsis (Arabidopsis thaliana), and common and unique features in coexpression partners and expression patterns were observed for these family members. We observed a correlation pattern between Os01g0968800, a drought-responsive element-binding transcription factor, Os02g0790500, a trehalose-6-phosphate synthase, and Os06g0219500, a small heat shock factor, reflecting the fact that genes responding to the same biological stresses are regulated together. The RAN database can be used as a tool to gain insight into a particular gene by examining its coexpression partners. © 2009 American Society of Plant Biologists.

Immunoaffinity purification of polyribosomes (polysomes) from crude leaf extracts of Arabidopsis (Arabidopsis thaliana) was achieved with transgenic genotypes that overexpress a translational fusion of a ribosomal protein (RP) with a His6-FLAG dual epitope tag. In plants with a cauliflower mosaic virus 35S:HF-RPL18 transgene immunopurification with anti-FLAG agarose beads yielded 60-Svedberg ribosomal subunits, intact 80-Svedberg monosomes and polysomes. Sucrose density gradient fractionation of the purified complexes demonstrated that the distribution of polysome size was similar in crude cell extracts and the purified complexes. The immunopurified complexes included putative cytosolic KPs of Arabidopsis and ribosome-associated proteins, as well as full-length transcripts of high and low abundance. Whole-genome profiling using long DNA oligonucleotide-based microarrays provided a high level of reproducibility between polysomal mRNA samples immunopurified from two independent biological replicates (r approximately 0.90). Comparison of immunopurified and total cellular RNA samples revealed that for most of the genes, the mRNAs were associated with the epitope-tagged polysomal complexes, with an average relative level of association of 62.06% + 4.39%. The results demonstrate that the immunopurification of polysomes can be a valuable tool for the quantification of mRNAs present in translation complexes in plant cells. This technology can be extended to evaluation of mRNA populations at the cell- or tissue-specific level by regulation of the tagged RP with distinct promoters. © 2005 American Society of Plant Biologists.

Q&A: Plant Science Professor Appointed Honorary Dean At Henan University In China
Life Outside our Atmosphere Should Be Evident, But It’s Not
More News