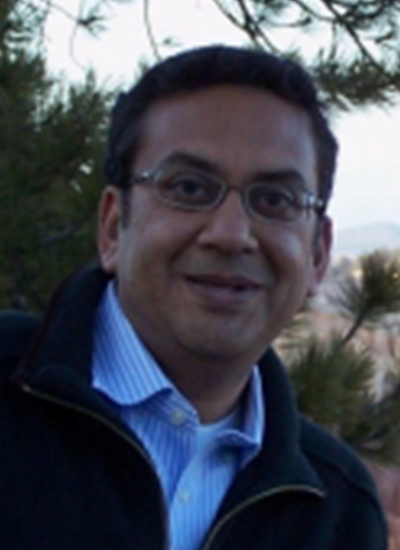 Professor, BIO5 Institute
Professor, Chemistry and Biochemistry-Sci
Primary Department
Chemistry & Biochemistry - Sci
Department Affiliations
Chemistry & Biochemistry - Sci
(520) 621-6331
ghosh@email.arizona.edu
Work Summary
The broad objective of our research program in Bioorganic Chemistry and Chemical Biology is to construct protein therapeutics, protein mimetics, biomaterials, and biosensors. Our research at the University of Arizona is highly multidisciplinary and utilizes techniques in organic synthesis, biochemistry, molecular biology, and a host of physical characterization methods. Our research motto is simple: Unraveling mysteries and Enabling discoveries.
Research Interest
Professor Neel Ghosh, is the Emily Davis and Homer Weed Distinguished Professor ’08 at the University of Arizona. His laboratory is broadly interested in Chemical Biology and Protein Design and Engineering with a focus on developing new tools and methods for advancing human health. The laboratory has a particular current interest in understanding protein kinases and protein-protein interactions and designing new ways to inhibit them in human diseases. Neel Ghosh is also a co-founder and Chief Scientific Officer for Luceome Biotechnologies. Neel received his doctoral degree in 1998 while working with Professor Jean Chmielewski at Purdue University. His doctoral research focused on designing inhibitors of protein-protein interactions and self-replicating peptides. In 1998 he joined Professor Andrew Hamilton and Professor Lynne Regan’s laboratories at Yale University as a joint postdoctoral fellow. At Yale, he discovered the first conditional split-Green Fluorescent Protein, which has been used as a means for measuring protein-protein interactions by many laboratories and the methodology is sometimes called fluorescent protein complementation. In 2001, Neel Ghosh joined the Department of Chemistry and Biochemistry at the University of Arizona as an Assistant Professor and was promoted to Associate Professor and then to the Davis & Weed Chair and Full Professor in 2011. Keywords: Chemistry, Biochemistry, Biomedical Engineering, Cancer

Self-replication has been demonstrated in synthetic chemical systems based on oligonucleotides, peptides and complementary molecules without natural analogues. However, within a living cell virtually no molecule catalyses its own formation, and the search for chemical systems in which both auto- and cross-catalysis can occur has therefore attracted wide interest. One such system, consisting of two self-replicating peptides that catalyse each other's production, has been reported. Here we describe a four- component peptide system that is capable of auto- and cross-catalysis and allows for the selective amplification of one or more of the products by changing the reaction conditions. The ability of this system selectively to amplify one or more molecules in response to changes in environmental conditions such as pH or salt concentration supports the suggestion that self-replicating peptides may have played a role in the origin of life.

Nanocrystalline semi-conductor materials, called quantum dots (QDs), exhibit unique optical and spectroscopic properties, which include broad absorption, narrow and tunable emission, resistance to photobleaching, strong luminescence, and long luminescent lifetimes. These remarkable properties of QDs have resulted in their use as an alternative to both small-molecule and protein fluorophores in innumerable biological applications. The overlap of QDs with the rich chemistry and biology that is characteristic of the peptide arena is an emerging research area. Peptides engineered with appropriate cysteines or histidines have served as ligands for producing water soluble QDs as well as for tagging protein ligands and biosensors to QD surfaces. Incorporation of cell-penetrating peptides on QD surfaces has allowed for the translocation of functionalized QDs into cells for intracellular imaging applications. QDs containing fluorescently labeled peptide substrates have shown utility in the development of novel protease assays. Moreover, QD labeled peptides that serve as ligands for cellular receptors provide an alternative to antibody mediated imaging at the whole-cell and single molecule level to study receptor distribution and trafficking. This review highlights the overlap between QD and peptide chemistry and speculates on future research directions. © 2006 Wiley Periodicals, Inc.