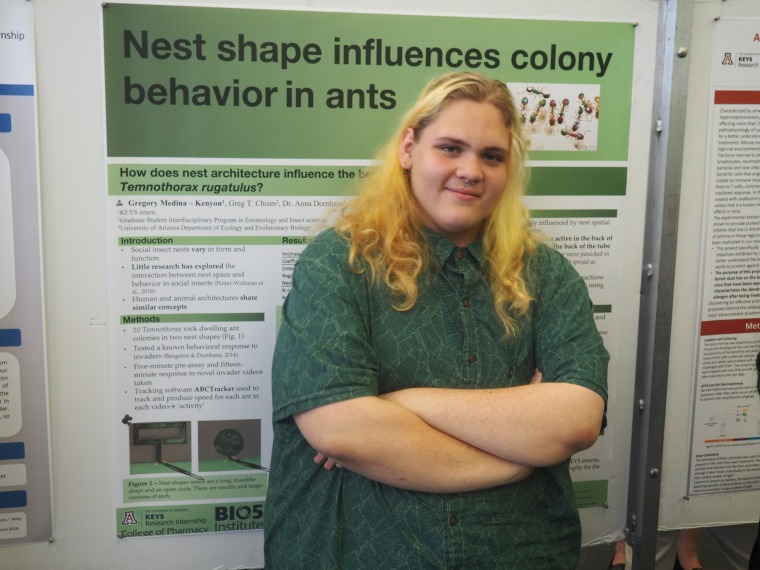 Passionate about supporting the mental and physical well-being of others, KEYS Crew mentor Gregory Medina-Kenyon shares his experiences with mental illness, homelessness, and the therapeutic qualities of art.
Dr. Brittany Uhlorn, BIO5 Institute

The 19-year-old has found solace in creating art, using it as a form of self-expression when it was often difficult to communicate his experiences and emotions with others during his turbulent childhood.  Medina-Kenyon now aims to combine his personal struggles, relationship with art, and knack for biology to change the lives of both the homeless and the 2021 KEYS interns.

Medina-Kenyon’s love for biology was sparked by his surroundings. As a young child, he was fascinated by plants and animals and wanted to learn more about the inner workings of himself, his family and their pets.

Though initially discouraged from pursuing science because he lacked strength in math, the curious child transformed into a budding young scientist in high school. Medina-Kenyon fondly remembers unwinding to science documentaries after a long day at school, and those videos served as his “gateway” to now studying biology in college.

In contrast to his brother, Medina-Kenyon lacked an “off” switch. Medina-Kenyon’s mother encouraged him to channel his high energy through art: weekly, sometimes daily drawing, writing and crafting projects.

“She really fostered my artistic spirit and love for the arts,” Medina-Kenyon says of his mom.

Art became a powerful form of self-expression as he navigated a “tumultuous upbringing.”

Born to a Mexican mother and white father in Southern California, Medina-Kenyon’s parents separated when he was just four years old – but according to Medina-Kenyon, the damage had already been done. He spent the next nearly 10 years bouncing between California and Arizona, living with either his mom or his dad, influenced by custody agreements and his mother’s battle with mental illness.

When Medina-Kenyon’s mother was institutionalized for her mental health condition, he was forced to move back to California with his father. Medina-Kenyon identifies this devastating experience as the instigator for his own mental illness.

“I have lasting anxiety and depression because of the way I was brought up,” he said.

During some of his most challenging times, Medina-Kenyon turned to art as a form of therapy and self-expression.

“It was a really validating experience to be able to share my art with people because sometimes the things I experienced were hard to express,” he said.

Once Medina-Kenyon’s mother was healthy, he moved back to Arizona and attended City High School in downtown Tucson. Here, three critical experiences united Medina-Kenyon’s passions for art and biology and defined his career aspirations.

While on a high school field trip to the Z Mansion, a Tucson wedding venue where hundreds of homeless people are served brunch every Sunday, Medina-Kenyon was taken aback. He never realized how many homeless people are “shut out” of emergency medical care and have a high mortality rate because of their conditions.

Later as a volunteer at the Tucson Museum of Art, Medina-Kenyon helped facilitate a free event where people were able to create their own art through drawing and painting stations. There, he witnessed firsthand the transformational power of providing an opportunity for creative expression.

“I was able to see homeless and impoverished people derive comfort through self-expression in the form of art,” he said.

Though deeply moved at the time, neither of these experiences profoundly affected Medina-Kenyon until he was homeless in 2019. He remembers being incredibly angry about the incongruence between his mother’s full-time job and inability to be compensated in a manner to afford housing and take care of her family.

“People view poverty and homelessness as a character flaw, not as a health issue or a symptom of government-induced poverty,” he said, “but it’s truly a systemic issue.”

When homeless, Medina-Kenyon lacked a space to practice the visual arts. To channel his energy and strong emotions, the high school student expressed himself through poetry, a medium he also considers a form of therapeutic art.

Medina-Kenyon’s experiences with homelessness and the power of art have fueled his desire to one day specialize in the therapeutic benefits of art for homeless people.

“If I can’t immediately fix the policy and legislative issues, then I want to be able to provide care to these people,” said Medina-Kenyon, now an incoming sophomore studying biology and art practice at Stanford University.

In addition to his passion for providing care for the homeless, Medina-Kenyon is eager to care for the 2021 KEYS interns as a Crew member. He aims to approach his role as a mentor from a “mental health point of view.” 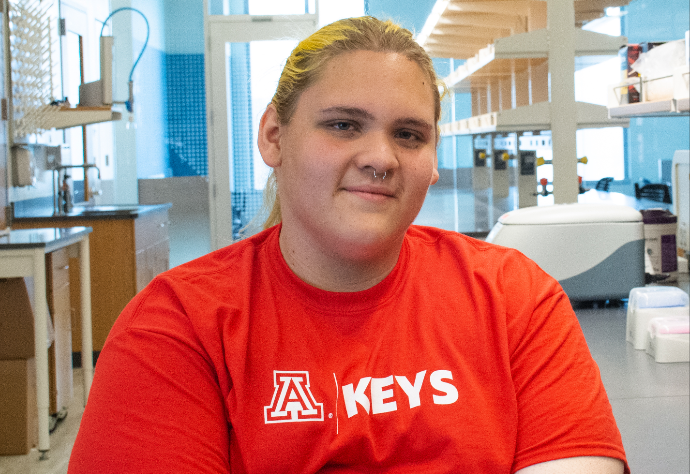 “There are a lot of things I’ve gone through that will be helpful to share with the interns,” he says, “including mental illness, being an eccentric person in the sciences, and not being straight. I wish I had a mentor who was willing to talk about these things when I was going through them.”

Ultimately, Medina-Kenyon hopes to teach the KEYS interns the therapeutic power of sharing experiences with one another, whether verbally or through art.