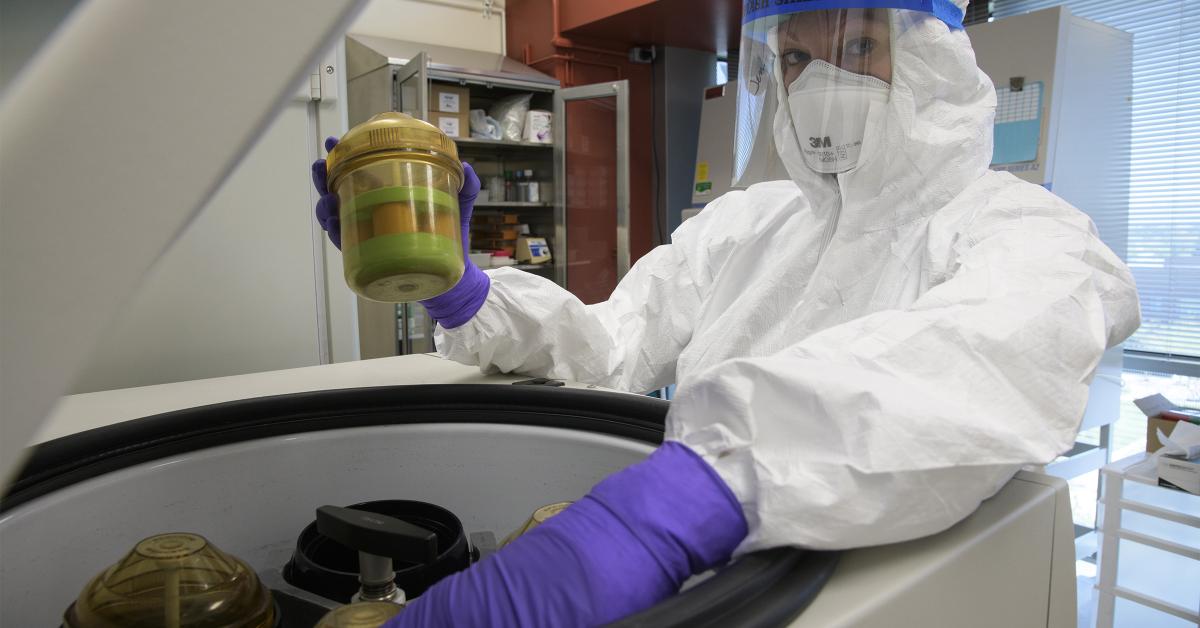 After she and nine family members were infected with SARS-CoV-2 during a family vacation, Jennifer Uhrlaub now advocates for the importance of wearing a mask and social distancing not only in public, but also around those close to us.
Brittany Uhlorn, BIO5 Institute

Jennifer Uhrlaub had been taking all available precautions to protect herself, her husband and their two daughters from contracting COVID-19. Uhrlaub, a research scientist who helped to develop the University of Arizona SARS-CoV-2 antibody test, innately knew the risks and what could happen if you became infected. She never expected that she would fall ill to the virus she was diligently researching to help others – until she tested positive on June 15.

Despite wearing masks and practicing social distancing, Uhrlaub suspects exposure occurred at their local grocery store the day before embarking on a road trip to visit her husband’s family in Nebraska. Both families had been “following all the rules” and believed it was low risk to spend the week together. However, not long after their trip began, symptoms of the virus emerged and spread like wildfire between the extended family members, changing Uhrlaub’s perspective on essential protective measures.

“If anything, having COVID-19 has reinforced to me that masking and distancing, which we were already doing in public, is so important to do with extended family,” Uhrlaub said. “After experiencing COVID-19, I feel like it’s so stunningly and obviously contagious before you have symptoms. I regret not wearing a mask on our vacation so much.”

As a scientist who has studied infectious viruses for almost 20 years, Uhrlaub is well-versed on the potential risks of viral infections, so COVID-19 was no different. When her lab’s principal investigator, Dr. Janko Nikolich-Žugich, professor and head of the Department of Immunobiology and member of the BIO5 Institute, approached her about working on SARS-CoV-2 in February, she was not concerned about working with the virus itself because of her extensive Biosafety Level 3 (BSL-3) training and the layers of measures in place to protect researchers. However, Uhrlaub was worried about working on campus during a time of community spread. She was especially concerned about the risk to her elderly in-laws who live with her family, but once the university began to shut down mid-March, Uhrlaub was more comfortable with the idea.

Beginning on April 1, Uhrlaub began her work with the virus, growing up stocks to use in basic viral detection experiments. Because the BSL-3 space where she already worked was the only space with clearance to study the live SARS-CoV-2 virus, she was responsible for training other researchers and writing protocols to ensure the virus would be safely studied by all. Uhrlaub also played an instrumental role in validating the COVID-19 antibody test produced at UArizona.

After two months of only traveling between her home, the lab and the grocery store while her husband, kids, and in-laws isolated themselves at home, Uhrlaub said her kids were “going crazy.” She and her husband, also a UArizona employee, considered the risks and decided it was relatively safe for their family of four to visit his sister and brother-in-law at their lake house in Nebraska. The trip would provide a much-needed break, and Uhrlaub’s children could spend quality time with their cousins.

The day before their trip, Uhrlaub and her family, masked and socially distanced from others, ventured to their local grocery store to purchase snacks for their long drive ahead. When they set out for Nebraska the following day, the family only ate take-out from roadside eateries and spent the night at a motel without indoor corridors to decrease their potential interaction with others.

“I really felt like we had minimized all of our risks,” Uhrlaub said.

When they finally arrived in Nebraska, Uhrlaub’s sister-in-law greeted them from behind a mask. Before entering the house, Uhrlaub and her in-laws had a thorough conversation about whether to mask during the visit. Because both families had been dutifully social distancing and wearing masks from the onset of the pandemic, the families agreed the risks of spreading COVID-19 between them was incredibly low. They decided to spend much of their time outdoors, and socially distance to the best of their abilities indoors…but masks weren’t deemed necessary.

“You can’t be perfect about wearing masks when you’re around family…but it turns out we made a collective bad decision,” Uhrlaub said in hindsight.

Two days later, Uhrlaub’s husband woke up with flu-like symptoms. Because he didn’t have a fever at the time, they both assumed he was simply run-down from all the outdoor activity the day prior. But that evening, his morning symptoms were compounded by a low-grade fever. Now concerned he had contracted COVID-19, Uhrlaub- who wasn’t experiencing any symptoms at the time- and her husband were tested the following day, June 15.

Both tests came back positive.

Uhrlaub knew it was likely that the entire family was infected because they had been in close quarters without masks. Following Uhrlaub’s positive result, three other adults - including another in-law who had also joined them at the cabin - and four children were also tested, all of which came back positive. The entire family immediately went into “lock-down” until her husband, who had the worst of the symptoms, had been fever-free for three days. Uhrlaub believes the quick turnaround time of the test results, just 48 hours, prevented anyone from spreading the virus further.

Only one person in the family ever spiked a fever over 100.4 degrees. Uhrlaub experienced headaches, chills, body aches, a cough, fatigue and a loss of taste. Strikingly, only two of the six children, four of whom were tested and received positive results, had any symptoms at all, including low fevers and mild fatigue.

“If we hadn’t tested them, we would have never known they were infected,” she said.

Despite her physical ailments, Uhrlaub claims the most debilitating symptom was the stress and worry she felt that one or more of her family members would need to be hospitalized.

Though she can’t be sure, Uhrlaub believes her husband encountered the virus during their seemingly innocent outing to the grocery store before their trip. Despite distancing from others and wearing masks themselves, at that time masks were not mandated in Tucson and Uhrlaub recalls that a maskless woman in front of them in the check-out line did not seem to respect the importance of both personal space and the plexiglass shield in front of the cashier. According to Uhrlaub, the timing also makes perfect sense because her husband became symptomatic exactly four days after their trip to the store, the textbook duration to develop symptoms from an acute viral infection.

Now having confronted COVID-19 not just as a researcher but as a patient herself, Uhrlaub deems universal masking as “absolutely key” to preventing the spread of disease. She also urges people to “get really comfortable with respectfully and politely advocating for themselves” in situations where others may not be respecting their space or wearing a mask.

As a mother, Uhrlaub is also concerned about schools opening too early, especially with the COVID-19 landscape changing each week. Though she believes her own children are now immune to the virus, she is concerned about asymptomatic children spreading the infection to their teachers, staff and more vulnerable peers, in addition to bringing it home to their parents and susceptible grandparents.

Uhrlaub understands there is no perfect scenario, as many students rely heavily on the in-person learning support they get in the classroom. While she thinks it’s a “terrible decision” to let children go back to school this quarter, Uhrlaub has a great deal of empathy for those families who rely on their schools in-person resources.

“You’re trying to weigh the risk of two scenarios that don’t normally overlap,” Uhrlaub said. “How do you weigh the risk of school during a viral pandemic and not having vulnerable kids in school where they receive learning support? How do you make that decision? I have no idea.”

As a researcher, Uhrlaub used her own blood as a negative control in experiments studying the virus earlier this spring. Now a past COVID-19 patient herself, the scientist said she’s ironically serving as a positive control, too.

Since the first week of July, Uhrlaub has been back at work training other COVID-19 researchers at the university to be able to work in the BSL-3 lab with the live virus. Uhrlaub is helping researchers collect preliminary data on studies screening for small molecular inhibitors and testing monoclonal antibodies against the virus, as well developing new models and tools to study the virus in the Nikolich-Zugich lab.

With strengthened urgency and focus, Uhrlaub has also developed a test to measure the levels of SARS-CoV-2 neutralizing antibodies, blood proteins associated with protective immunity that prevent reinfection. The test is different from the original serology antibody test which detects antibodies that only recognize - not inactivate - the virus.

Because the neutralizing assay is able to validate the original test, researchers and medical professors now know that if a patient tests positive by the serology test, they also have neutralizing antibodies which should provide protective immunity.