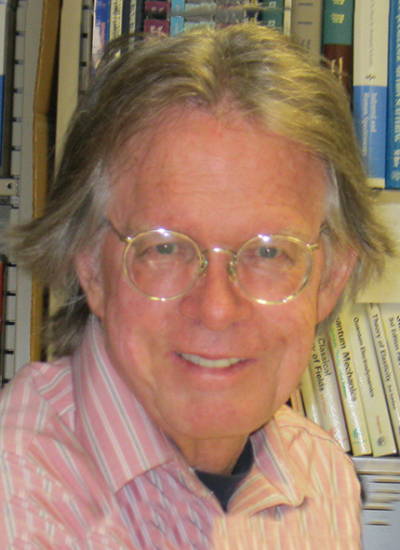 Research Interest
Michael F. Brown is Professor of Chemistry & Biochemistry at the University of Arizona. He is co-director of the Biological Physics Program and the Chemical Physics Program, and was a co-founder of the Biological Chemistry Program at the University of Arizona. He is internationally renowned for his work on the molecular basis of activation of G-protein-coupled receptors that are the targets for the majority of pharmaceuticals and medicines used by humans. The focus of his work is on biomembranes, with a particular emphasis on lipid-protein interactions in relation to potential drug targets involving membrane proteins. He is involved with investigation of the molecular basis of visual signaling involving rhodopsin. Moreover, Professor Brown is an expert in nuclear magnetic resonance (NMR) spectroscopy. His activities in the area of biomolecular NMR spectroscopy involve the devolvement and application of methods for studying the structure and dynamics of biomolecules. Michael Brown has authored over 130 original research papers, 10 book chapters, 4 book reviews, and has published more than 275 abstracts. His current H-index is 43. He numbers among his coworkers various prominent scientists worldwide. He presents his work frequently at national and international conferences, and is the recipient of a number of major awards. Professor Brown's many contributions have established him as a major voice in the area of biomembrane research and biomolecular spectroscopy. He is frequently a member of various review panels and exerts an influence on science policy at the national level. Among his accolades, he is an elected Fellow of the American Association for the Advancement of Science; American Physical Society; Japan Society for the Promotion of Science; and the Biophysical Society. He is a Fellow of the Galileo Circle of the University of Arizona. Most recently, he received the Avanti Award of the Biophysical Society. This premier honor recognizes his vast and innovative contributions to the field of membrane biophysics, and groundbreaking work in the development of NMR techniques to characterize lipid structure and dynamics. Most recently he presented the 2014 Avanti lecture of the Biophysical Society.

Solid-state deuterium (2H) NMR spectroscopy enables one to study both equilibrium and dynamical properties of membrane constituents at the molecular level and can yield significant insights regarding the organization of non-bilayer lipid aggregates. We have investigated a representative unsaturated phosphatidylethanolamine, viz., 1-perdeuteriopalmitoyl-1-linoleoyl-sn-glycero-S-phosphoethanolamine, PLPE-d31, in the lamellar, or Lα, phase and the reversed hexagonal, or HII, phase. Phosphorus-31 (31P) NMR studies of PLPE-d31 in the HII phase revealed that the chemical shift anisotropy of the phosphoethanolamine head groups, Δσ, was scaled by the expected geometrical factor of -1/2 relative to the lamellar state. However, we found the occurrence of a further reduction in the 2H NMR quadrupolar splittings, ΔνQ, of the 2H-labeled palmitoyl acyl chain segments. These observations point toward the role of interfacial curvature with regard to properties of reverse hexagonal phase lipids, and indicate that the pivotal position or neutral surface of approximately constant area may lie near the glycerol or polar head group region. Variations in the acyl chain packing due to curvature of the aqueous interface yield significant differences in the segmental order profiles as determined by 2H NMR spectroscopy. The latter reflect the local orientational order of the acyl chains and can be used together with simple statistical theories to extract positional or structural information. Average projected acyl chain lengths and mean interfacial or cross-sectional areas for PLPE-d31 in the different phases have been calculated. In addition, we describe a new means of estimating the radius of curvature of HII phase lipid aggregates utilizing 2H NMR spectroscopy, which is based on the difference between the lamellar and hexagonal phase order profiles. Here the radius of curvature, Rc, is defined as the distance from the center of the water core to the lipid/water interface, near the carbonyl segments of the acyl chains, giving Rc = 25.4-28.1 Å for PLPE-d31 in the HII phase at 60°C. This value is in good agreement with previous X-ray diffraction studies of 1,2-dioleoyl-sn-glycero-3-phosphoethanolamine (DOPE). Alternatively, the data yield for the radius of the central water core that Rw = 17.8-20.5 Å at 60°C. The differences in geometry also lead to higher quadrupolar echo relaxation rates (R2e) for the lipid acyl segments closest to the aqueous interface in the HII versus the Lα phase. We propose that this enhancement is due to an additional relaxation mechanism found in the hexagonal phases, namely, translational diffusion of lipids about the cylinder axes. For comparison, the normal hexagonal (HI) and lamellar (Lα) phases of a lyotropic system comprising perdeuterated potassium laurate were also studied. This research indicates clearly that the packing and dynamical properties of the acyl chains of phospholipids depend on the curvature of the aqueous interface and, thus, the aggregate geometry. The latter is related to the average shape of lipids in their respective phases and to the curvature free energy, which in the planar state may influence protein-mediated functions of membranes. © 1993 American Chemical Society.

Simulation of experimental solid-state deuterium (2H) NMR spectra of nucleic acid fibers allows one to deduce important microscopic information about the orientation of the base pairs and the helix axis disorder. However, existing interpretations of the 2H NMR spectra of Na-DNA at low humidity are not in complete agreement with the X-ray results. Here we have successfully explained 2H NMR spectra of oriented films of both Li-DNA and Na-DNA with the purine bases specifically deuterated at position C8. The transformation of the coupling tensor from the principal axis system to the laboratory frame has been expanded into four subtransformations, including the crystallographically defined base plane tilt and roll angles. Alternative treatments in terms of noncollective or collective helix axis disorder are considered, and the appropriate powder-pattern limits are recovered. The 2H NMR spectral line shapes have been calculated by using the Monte Carlo method, i.e., by randomly sampling over the static uniaxial distributions of the base pairs and helix axes. The results of the simulations and the structural parameters are in excellent agreement with X-ray diffraction studies, which indicate the presence of either the A-form or B-form of DNA under the given experimental conditions. Only a static distribution of base pairs is needed to account for the spectral line shapes on the 2H NMR time scale, whereas the effects of faster librational motions are contained in the intrinsic line widths and the effective coupling constants. The present 2H NMR approach can aid in developing a more comprehensive picture of DNA conformation and dynamics as an adjunct to X-ray crystallography, fluorescence depolarization, and light-scattering methods, and moreover may prove useful in studies of protein-nucleic acid interactions.

Photon absorption by rhodopsin is proposed to lead to an activation pathway that is described by the extended reaction scheme Meta I → Meta II a → Meta IIb → Meta IIbH+, where Meta IIbH+ is thought to be the conformational substate that activates the G protein transducin. Here we test this extended scheme for rhodopsin in a membrane bilayer environment by investigating lipid perturbation of the activation mechanism. We found that symmetric membrane lipids having two unsaturated acyl chains, such as 1,2-dioleoyl-sn-glycero-3- phosphocholine (DOPC), selectively stabilize the Meta IIa substate in the above mechanism. By combining FTIR and UV-visible difference spectroscopy, we characterized the structural and functional changes involved in the transition to the Meta IIa intermediate, which links the inactive Meta I intermediate with the Meta IIb states formed by helix rearrangement. Besides the opening of the Schiff base ionic lock, the Meta IIa substate is characterized by an activation switch in a conserved water-mediated hydrogen-bonded network involving transmembrane helices H1/H2/H7, which is sensed by its key residue Asp83. On the other hand, movement of retinal toward H5 and its interaction with another interhelical H3/H5 network mediated by His211 and Glu122 is absent in Meta IIa. The latter rearrangement takes place only in the subsequent transition to Meta II b, which has been previously associated with movement of H6. Our results imply that activating structural changes in the H1/H2/H7 network are triggered by disruption of the Schiff base salt bridge and occur prior to other chromophore-induced changes in the H3/H5 network and the outward tilt of H6 in the activation process. © 2010 American Chemical Society.

Rapid lateral diffusion of phospholipid molecules in multilamellar dispersions is shown to prevent the observation, in powder pattern spectra, of the orientation dependence of 2H nuclear magnetic spin-lattice relaxation. The spin-lattice relaxation rate is found to have a frequency dependence suggestive of collective director fluctuations. © 1981.