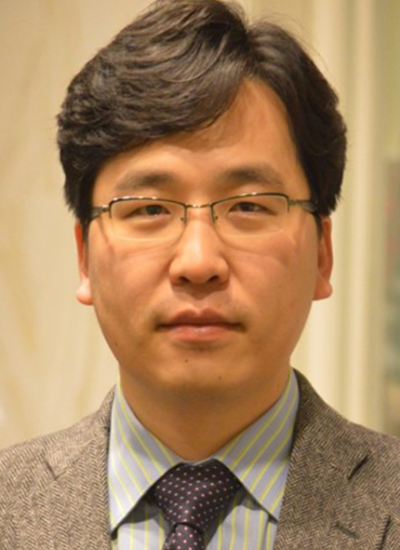 Minkyu Kim's research interests are in the areas of biopolymers and biomaterials for advanced national defense and healthcare. He is currently working to develop functional biopolymer materials for the treatment of antimicrobial-resistance diseases and atherosclerosis.

Minkyu Kim, Ph.D., is an Assistant Professor in the Department of Materials Science and Engineering and the Department of Biomedical Engineering at the University of Arizona. He received a M.S. (2006) in Biomedical Engineering and a Ph.D. (2011) in Mechanical engineering and Materials Science at Duke University. During his Ph.D., he worked in the Single-Molecule Force Spectroscopy group led by Prof. Marszalek. He was a postdoc at MIT from 2012 to 2016, and worked in the Bioinspired and Biofunctional Polymers group led by Prof. Olsen. Dr. Kim’s research is focused on the design and development of biopolymer-based functional materials for targeted applications in healthcare and for national defense. Based on his diverse research experiences in the areas of biopolymer nanomechanics, polymer physics and self-assembly, biomolecular engineering and soft materials, his group is currently developing (a) mechanically responsive soft materials that mimic reversible deformability of red blood cell and that can be utilized as targeted drug delivery vehicles for the early treatment of atherosclerosis and (b) nuclear membrane inspired biopolymer materials that selectively filter and neutralize a broad range of bacteria, fungi and viruses for pharmaceutical, food safety, water decontamination and defense applications. In addition to biomaterial development to mitigate atherosclerosis and infectious diseases, Dr. Kim is also interested in addressing how bioinspired design and biosynthesis can be used for the preparation of novel functional materials, how the nanomechanics of folded biopolymers and artificially engineered hyperbranched biopolymer structures can be translated into the mechanics of macromolecular materials that provide new insight into polymer science, and how protein sequences can control parameters that regulate the functional properties of polymeric materials. Lab Website: http://kim.lab.arizona.edu

A simple approach to enhancing the activity and stability of organophosphorus hydrolase (OPH) is developed based on interactions between the hydrophobic poly(propylene oxide) (PPO) block of amphiphilic Pluronics and the enzyme. This strategy provides an efficient route to new formulations for decontaminating organophosphate neurotoxins.

Anfinsen's thermodynamic hypothesis implies that proteins can encode for stretching through reversible loss of structure. However, large in vitro extensions of proteins that occur through a progressive unfolding of their domains typically dissipate a significant amount of energy, and therefore are not thermodynamically reversible. Some coiled-coil proteins have been found to stretch nearly reversibly, although their extension is typically limited to 2.5 times their folded length. Here, we report investigations on the mechanical properties of individual molecules of ankyrin-R, beta-catenin, and clathrin, which are representative examples of over 800 predicted human proteins composed of tightly packed alpha-helical repeats (termed ANK, ARM, or HEAT repeats, respectively) that form spiral-shaped protein domains. Using atomic force spectroscopy, we find that these polypeptides possess unprecedented stretch ratios on the order of 10-15, exceeding that of other proteins studied so far, and their extension and relaxation occurs with minimal energy dissipation. Their sequence-encoded elasticity is governed by stepwise unfolding of small repeats, which upon relaxation of the stretching force rapidly and forcefully refold, minimizing the hysteresis between the stretching and relaxing parts of the cycle. Thus, we identify a new class of proteins that behave as highly reversible nanosprings that have the potential to function as mechanosensors in cells and as building blocks in springy nanostructures. Our physical view of the protein component of cells as being comprised of predominantly inextensible structural elements under tension may need revision to incorporate springs.

The effects of protein surface potential on the self-assembly of protein-polymer block copolymers are investigated in globular proteins with controlled shape through two approaches: comparison of self-assembly of mCherry-poly(N-isopropylacrylamide) (PNIPAM) bioconjugates with structurally homologous enhanced green fluorescent protein (EGFP)-PNIPAM bioconjugates, and mutants of mCherry with altered electrostatic patchiness. Despite large changes in amino acid sequence, the temperature-concentration phase diagrams of EGFP-PNIPAM and mCherry-PNIPAM conjugates have similar phase transition concentrations. Both materials form identical phases at two different coil fractions below the PNIPAM thermal transition temperature and in the bulk. However, at temperatures above the thermoresponsive transition, mCherry conjugates form hexagonal phases at high concentrations while EGFP conjugates form a disordered micellar phase. At lower concentration, mCherry shows a two-phase region while EGFP forms homogeneous disordered micellar structures, reflecting the effect of changes in micellar stability. Conjugates of four mCherry variants with changes to their electrostatic surface patchiness also showed minimal change in phase behavior, suggesting that surface patchiness has only a small effect on the self-assembly process. Measurements of protein/polymer miscibility, second virial coefficients, and zeta potential show that these coarse-grained interactions are similar between mCherry and EGFP, indicating that coarse-grained interactions largely capture the relevant physics for soluble, monomeric globular protein-polymer conjugate self-assembly.