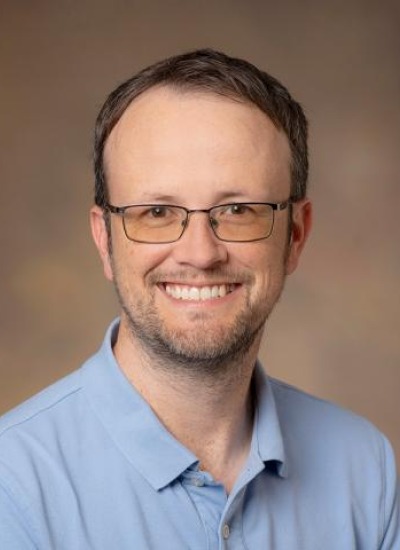 Associate Professor, BIO5 Institute
Associate Professor, Molecular and Cellular Biology
Primary Department
Molecular and Cellular Biology
Department Affiliations
Molecular and Cellular Biology
BIO5 Institute
(520) 626-1881
rbuchan@email.arizona.edu
Work Summary
The Buchan lab studies how cells regulate gene expression at the level of cytoplasmic messenger RNA (mRNA), the templates of protein synthesis. Areas of particular interest include mRNA-protein bodies called stress granules and P-bodies, which regulate mRNA function, cell signaling, and are implicated in the pathology of viral replication, various cancers and neurodegenerative diseases such as ALS.
Research Interest
The control of gene expression is critical to nearly all aspects of cellular biology, from maintaining basic cell function and identity, to the ability of cells to respond to numerous signals that arise during processes such as development, exposure to pathogens or changes in the cellular environment. A key means by which all cells enact appropriate gene expression responses is to alter the function of messenger RNAs (mRNAs). mRNAs exist in different functional states, dependent upon the proteins bound to them. These states include translation (protein synthesis), repression (off state) and decay. The localization of an mRNAs can also affect its function, thus cells are offered an array of spatial and temporal mechanisms for gene expression control at the mRNA level. mRNAs can also cycle between these different functional states. For example, mRNAs exiting translation often accumulate in distinct mRNA-protein (mRNP) assemblies known as P-bodies and stress granules, from which they may ultimately return to translation again or possibly undergo mRNA decay. Dr Buchan (Ph.D, B.S.) and his lab are particularly interested in the study of P-bodies and stress granules. These conserved, mRNA-protein (mRNP) bodies contain important protein regulators of mRNA decay and translation, as well as signaling proteins, and thus affect gene expression control and cell signaling pathways. In addition, they strongly resemble other important mRNP granules that function in embryogenesis (maternal granules) and memory formation (neuronal transport granules). Finally, stress granules and P-bodies have numerous connections to disease, such as an involvement in RNA viral replication, elevated levels in certain cancer types, as well as the formation of aberrant stress granules in neurodegenerative diseases such as Amyotrophic Lateral Sclerosis (ALS). The Buchan lab uses yeast and cell line models to study the assembly, disassembly and function of stress granules and P-bodies, and how aspects of stress granule and P-bodies contribute to ALS and forms of cancer

The nuclear THO and TREX-2 complexes are implicated in several steps of nuclear mRNP biogenesis, including transcription, 3' end processing and export. In a recent genomic microscopy screen in Saccharomyces cerevisiae for mutants with constitutive stress granules, we identified that absence of THO and TREX-2 complex subunits leads to the accumulation of Pab1-GFP in cytoplasmic foci. We now show that these THO/TREX-2 mutant induced foci ("TT foci") are not stress granules but instead are a mRNP granule containing poly(A)(+) mRNA, some mRNP components also found in stress granules, as well several proteins involved in mRNA 3' end processing and export not normally seen in stress granules. In addition, TT foci are resistant to cycloheximide-induced disassembly, suggesting the presence of mRNPs impaired for entry into translation. THO mutants also exhibit defects in normal stress granule assembly. Finally, our data also suggest that TT foci are targeted by autophagy. These observations argue that defects in nuclear THO and TREX-2 complexes can affect cytoplasmic mRNP function by producing aberrant mRNPs that are exported to cytosol, where they accumulate in TT foci and ultimately can be cleared by autophagy. This identifies a novel mechanism of quality control for aberrant mRNPs assembled in the nucleus.

Saccharomyces cerevisiae (budding yeast) is a powerful eukaryotic model organism ideally suited to high-throughput genetic analyses, which time and again has yielded insights that further our understanding of cell biology processes conserved in humans. Lithium Acetate (LiAc) transformation of yeast with DNA for the purposes of exogenous protein expression (e.g., plasmids) or genome mutation (e.g., gene mutation, deletion, epitope tagging) is a useful and long established method. However, a reliable and optimized high throughput transformation protocol that runs almost no risk of human error has not been described in the literature. Here, we describe such a method that is broadly transferable to most liquid handling high-throughput robotic platforms, which are now commonplace in academic and industry settings. Using our optimized method, we are able to comfortably transform approximately 1200 individual strains per day, allowing complete transformation of typical genomic yeast libraries within 6 days. In addition, use of our protocol for gene knockout purposes also provides a potentially quicker, easier and more cost-effective approach to generating collections of double mutants than the popular and elegant synthetic genetic array methodology. In summary, our methodology will be of significant use to anyone interested in high throughput molecular and/or genetic analysis of yeast.

Amyotrophic lateral sclerosis (ALS) is a fatal motor neuron degenerative disease. ALS-affected motor neurons exhibit aberrant localization of a nuclear RNA binding protein, TDP-43, into cytoplasmic aggregates, which contributes to pathology via unclear mechanisms. Here, we demonstrate that TDP-43 turnover and toxicity depend in part upon the endocytosis pathway. TDP-43 inhibits endocytosis, and co-localizes strongly with endocytic proteins, including in ALS patient tissue. Impairing endocytosis increases TDP-43 toxicity, aggregation, and protein levels, whereas enhancing endocytosis reverses these phenotypes. Locomotor dysfunction in a TDP-43 ALS fly model is also exacerbated and suppressed by impairment and enhancement of endocytic function, respectively. Thus, endocytosis dysfunction may be an underlying cause of ALS pathology.

Non-small-cell lung cancer (NSCLC) constitutes 85% of all lung cancers, and is the leading cause of cancer-related death worldwide. The poor prognosis and resistance to both radiation and chemotherapy warrant further investigation into the molecular mechanisms of NSCLC and the development of new, more efficacious therapeutics. The processes of autophagy and apoptosis, which induce degradation of proteins and organelles or cell death upon cellular stress, are crucial in the pathophysiology of NSCLC. The close interplay between autophagy and apoptosis through shared signaling pathways complicates our understanding of how NSCLC pathophysiology is regulated. The apoptotic effect of autophagy is controversial as both inhibitory and stimulatory effects have been reported in NSCLC. In addition, crosstalk of proteins regulating both autophagy and apoptosis exists. Here, we review the recent advances of the relationship between autophagy and apoptosis in NSCLC, aiming to provide few insights into the discovery of novel pathogenic factors and the development of new cancer therapeutics.

Eukaryotic cells respond to cellular stresses by the inhibition of translation and the accumulation of mRNAs in cytoplasmic RNA-protein (ribonucleoprotein) granules termed stress granules and P-bodies. An unresolved issue is how different stresses affect formation of messenger RNP (mRNP) granules. In the present study, we examine how sodium azide (NaN(3)), which inhibits mitochondrial respiration, affects formation of mRNP granules as compared with glucose deprivation in budding yeast. We observed that NaN(3) treatment inhibits translation and triggers formation of P-bodies and stress granules. The composition of stress granules induced by NaN(3) differs from that of glucose-deprived cells by containing eukaryotic initiation factor (eIF)3, eIF4A/B, eIF5B and eIF1A proteins, and by lacking the heterogeneous nuclear RNP (hnRNP) protein Hrp1. Moreover, in contrast with glucose-deprived stress granules, NaN(3)-triggered stress granules show different assembly rules, form faster and independently from P-bodies and dock or merge with P-bodies over time. Strikingly, addition of NaN(3) and glucose deprivation in combination, regardless of the order, always results in stress granules of a glucose deprivation nature, suggesting that both granules share an mRNP remodeling pathway. These results indicate that stress granule assembly, kinetics and composition in yeast can vary in a stress-specific manner, which we suggest reflects different rate-limiting steps in a common mRNP remodeling pathway.