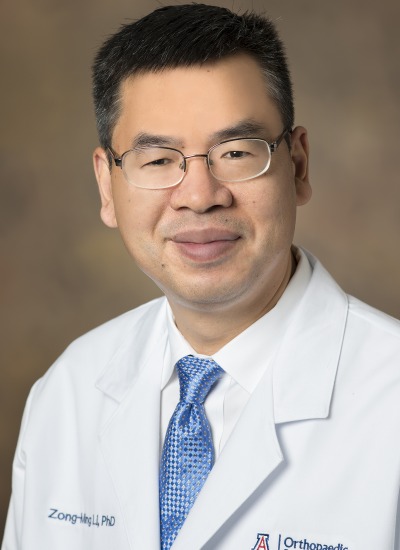 Zong-Ming Li, PhD, is currently the William and Sylvia Rubin Endowed Chair of Orthopedic Research at The University of Arizona, and a Professor of Orthopedic Surgery and Biomedical Engineering. Dr. Li is also the Vice Chair for Research in Department of Orthopedic Surgery, Director of Robert G. Volz, MD Orthopedic Research Laboratories, Associate Director of University of Arizona Arthritis Center, and Director of the Hand Research Laboratory. Prior to moving to University of Arizona, Dr. Li was a Professor in Cleveland Clinic Lerner College of Medicine, Case Western Reserve University, and held appointments as Full Staff in the Departments of Biomedical Engineering, Orthopedic Surgery, and Physical Medicine & Rehabilitation at the Cleveland Clinic. While in Cleveland, Dr. Li was an Adjunct Professor in Chemical and Biomedical Engineering at the Cleveland State University where he served as the Co-Chair of the Applied Biomedical Engineering PhD Program, a joint educational establishment between Cleveland Clinic and Cleveland State University. Dr. Li has more than 30 years of experience in musculoskeletal research and education, including (1) his current position as an Endowed Chair of Orthopedic Research (2019-); (2) Professor and Staff at the Cleveland Clinic in Biomedical Engineering, Orthopedic Surgery, and Physical Medicine & Rehabilitation (2009-2019); (2) Assistant/Associate Professor in Orthopedic Surgery, Bioengineering, and Occupational Therapy at the University of Pittsburgh (2001-2009); (3) Assistant Professor in Physical Therapy at Walsh University (1998-2001); (4) doctoral studies in biomechanics at the Pennsylvania State University (1995-1998); (5) research experience in orthopedic biomechanics at the Shanghai Institute of Orthopaedics and Traumatology of Ruijin Hospital (1992-1995); (6) graduate studies for a Master’s degree in musculoskeletal biomechanics from the Sichuan University (1989-1992); and (7) undergraduate studies in engineering mechanics and a bachelor’s thesis in sports biomechanics from the Southwest Jiaotong University in China (1985-1989). As an enthusiastic supporter and contributor to his profession, Dr. Li has served on the editorial boards of 18 journals related to bioengineering and orthopedics and has reviewed manuscripts for more than 30 professional journals. He has extensively contributed to organizing national and international conferences related to orthopedics, bioengineering, rehabilitation, kinesiology, and biomechanics. In his service to professional societies, Dr. Li was the President of the World Association for Chinese Biomedical Engineers (WACBE, 2013-2015), a member of the Executive Board of the American Society of Biomechanics (ASB, 2009-2012), Co-Chair of the Upper Extremity Topic Committee of the Orthopaedic Research Society (ORS, 2007-2009), and a Member of the Research Management Committee of the American Society for Surgery of the Hand (ASSH, 2014-2017). He is currently a member of the Board of Directors, Asian-American Institute for Research and Education (ASIAM 2017-), and the President of Hand and Wrist Biomechanics International (HWBI, 2012-).

Dr. Li has broad research interests in musculoskeletal biomechanics, with a particular focus on the hand and upper extremity. He has published more than 120 peer-reviewed articles in 50+ journals, given 100+ invited lectures worldwide, and presented over 300 podium and poster presentations in professional conferences. His research work has resulted in significant impact on biomechanics and motor control of the musculoskeletal function and dysfunction, particularly for the hand and upper extremity. In recognition of his "seminal contributions to hand and wrist biomechanics that impact better outcomes for patients with carpal tunnel syndrome”, Dr. Li has been elected to the College of Fellows of the American Institute for Medical and Biological Engineering (AIMBE).