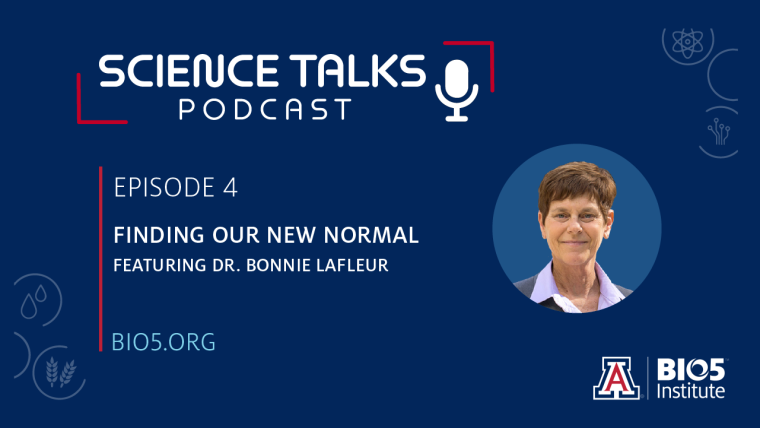 Dr. Bonnie LaFleur gives us a teaser about her upcoming Precision Wellness in the Time of COVID-19 lecture that addresses the return to normalcy amid the COVID-19 pandemic.
Dr. Brittany Uhlorn, BIO5 Institute

Now a year into the COVID-19 pandemic, we're eager to return to life as it once was - but is that possible? If not, what does our "new normal" look like? Dr. Bonnie LaFleur, a BIO5 member and research professor of biostatistics, discusses how the different COVID-19 testing methods and vaccination efforts will enable us to one day go back to our old ways of lives. She also stresses that building "social contracts" with those in our inner circle are essential to keeping ourselves and others safe.

In March, you’ll be giving a talk about the transition to normalcy during our Precision Wellness in the Time of COVID-19 series. What have you done over the past year to hold on to normalcy, whatever that looks like for you?

I'm a lucky person because a lot of my work doesn't necessarily require a face-to-face interaction. We are used to collaborating with people from all over the world and also all over the state of Arizona. Because statisticians are collaborative creatures, from a personal standpoint, though, I need my outlets. My outlet is running, which has been fairly easy for me to continue doing because it's something that you can do by yourself and still get a lot of satisfaction out of it. I do have a lot of running friends though, and they're very social creatures. My running has never been something that I had to do socially unless I'm racing.

Can we have a little teaser about your upcoming talk?

One of the talks that I have been giving around the university is around the testing that is available – the importance, the different types, and how they’re going to be used during this transition period. That will be the first part of my talk.

The second part of my talk is about how we get through the next six to eight months. This is not a light switch. It's not like one day everything's going to be back to normal again. We have to think about how we transition and more importantly, how we transition socially as there are going to be, likely into 2022, certain public health mitigations that we're all going to have to try to incorporate in our lives. It may be different for some people than for other people.

There are guidelines for how people learn to interact with each other when we all have different risk levels, or because of the types of jobs we do, or because of our health situations and how well the vaccines are likely to work in certain people. So how does one actually start socially engaging in a world like that?

We all are entering into an age of social contracts where you need to be comfortable setting your boundaries with people, and with no judgment. You need to be able to withdraw from people who maybe have different boundaries than you. We actually learned a lot about this during AIDS, because we had a pandemic that killed people and there wasn't any treatment for it for 12 years. During that time, we learned a lot about how to give people resources for setting your own boundaries with the people that you interact with.

This idea has a name - it's called harm reduction.

As a follow-up, what do you think about the term “social distancing?”

The challenge is once you have public health terms that are the widely adopted, that have a very specific definition, it's very difficult to change because then it gets confusing for people. If some people call it physical distancing and some people call it social distancing, then I think it's fine within your own social circle. This is the importance of being able to have the conversations because you can call it whatever you want to in your social circle. This is the point where we make these social contracts, which sound like a legal thing, but it's not.

It’s first about deciding on terminology. We might say, “In our social circle, we don't like that term social distancing because it means something more than what I really want to have with you.” That's one of the conversations that you have with your social circle, and there is actually guidance for how to do this. Think about the Superbowl. All of those NFL teams had social pods, just for them, it was a professional pod. They had rules that they had to follow in order to be able to engage in that pod. Those were very directive, and they were maybe not the same as what we might have in our social circle, but the idea and concept are the same. Somebody came up with a set of rules. Everybody else agreed to those rules so that they could do what they wanted.

If you don't open up and start talking about things, generally speaking, things don't get better. Talking about things can help make them better, so we need to make people feel comfortable with engaging in conversations that say, “This is my belief system. This is what I feel comfortable with.” We need to be sensitive to what others need and want. What I want to do is sort of talk about where to get these kinds of resources and why it’s important to have these conversations.

It’s also important to note that our social circle may have to grow and contract, given the environment that we're in. When community transmission is low, we can expand it a little bit more under certain guidelines. When a community transmission is high, we might have to contract it. The way that we expand and contract is by looking at our social contract that we've entered in with our friends. Some might want to change it, and others need not judge. You're not going to lose friends over this. You just need to be able to say, “Hey, I understand you have your boundaries. We'll still be friends when things are better and let's reach out. In the meantime, let's have our Zoom Happy Hours. Let's stay in touch”

During very low community transmission, there's no reason why we can't have lunch together outside at a place where we can be six to twelve feet apart. That isn't actually that dangerous right now. You have to be cognizant of where you do that because there are rules, for example, on the U of A campus, they wouldn't like you to do that. At Reed Park on the other hand, as long as there's not a ton of other people, it is probably a fairly safe place to go. You each have your own towel that you're sitting on, and you can still communicate with each other anywhere outdoors when it’s a beautiful day in Tucson.

For example, in New York, they did that in Central Park. When their transmission rates were low, you saw all these people setting up towels, 12 feet apart from each other, enjoying the day in the huge city. There are a lot of places like New York that have already been integrating this social pod interaction and giving people the resources to be able to do that. I want to point people in the direction of where they can learn more about  doing this safely, and to highlight some of the big-ticket items that we have to be able to keep in mind, like the rules of social or physical distance and masking.

These kinds of social contracts and discussions will allow is to transition into some sort of normalcy, which is what we are all hoping for one day.

Vaccinations likely also play an important role in these discussions – talk to us a bit about where we are in terms of vaccination efforts and why it’s important to get your shot.

It's really important for people to understand that we have not vaccinated a very large proportion. We've done a fantastic job so far, but it's been a very short period of time, and it looks like we’re going to have a mixture of people who are vaccinated and people who aren't for quite a while. We need to be able to live together for a while. None of us are safe until all of us are safe. That’s the mantra.

As we learned from this pandemic, it is a world problem. We live in a world now we are very globally interconnected. We all have to be cognizant that none of us are safe until all of us are for a while. We really can't leave people who aren't vaccinated aside.

The pandemic and the guidelines seem to change every week, even every day. How has the changing nature of the pandemic affected your research and your messaging?

I think it's both been very good for people and also very anxiety provoking for people because the information changes all the time. That's just the reality of living in a pandemic when everything does change all the time – our transmission rates expand and contract all the time. We were learning as we went, but the great thing is that we had tests and a vaccine within a year, which is just unheard of.

The best we can do is give people the resources where they can go and find things on their own and see where things are updated to get guidance.

We're social scientists in addition to statistical analysts. There are so many statistical nuance things that I can talk about, and those are important, but the social aspects are, too. It’s my public health and sociology background that drive me to want to do this. It’s been exciting because it's the first time that I've been able to get information out so quickly and have it been so meaningful and useful so quickly in my career.

What’s another positive about this pandemic for you?

As challenging as this year has been, I have been able to reconnect with my public health roots that I have worked with for many years, but never on a daily basis. We're teaching each other and working together to do what we felt was best for our community. It has been such a diligent effort on the part of all public health, both local and at the university, at ASU and at NAU, and local and municipal public health departments. We have worked together for the past year in ways that we never would have dreamed. All of us had connections with these people because we have some things in common, but boy, we were daily working together over the past year, and it has been a phenomenal kind of learning experience, at least for me, that I'm extremely grateful for.

The common goal was one thing, but also the wide-ranging experience that you have to bring to the table to get something like this to work. It's been a real learning experience. For me, personally and professionally, it's just been a growth opportunity in something that I never thought that I would have ever been faced with. I have really enjoyed being able to say that I was a very small part of something like this – that’s a personal accomplishment.