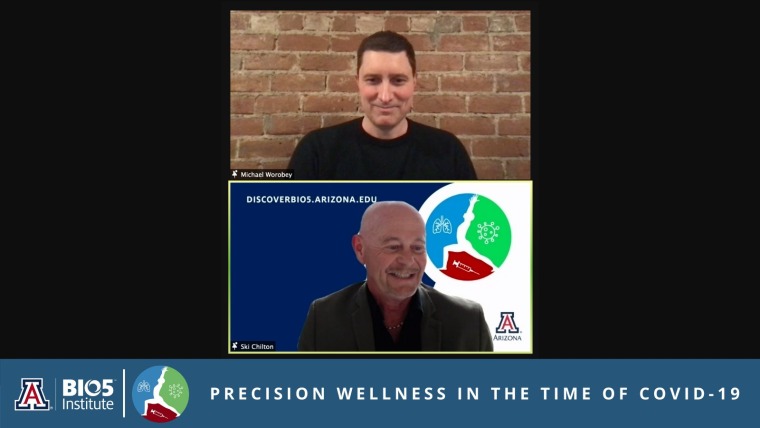 On February 15, Dr. Michael Worobey presented his work on the origins of the COVID-19 pandemic as part of the Precision Wellness in the Time of COVID-19 series.
Brittany Uhlorn, BIO5 Institute

There were – and still are – many unknowns about the birth of COVID-19: What type of animal spread the virus to humans? Does the U.S. outbreak directly trace back to the Wuhan wet market? Is just one person in Washington responsible for spreading COVID-19 across our entire country?

Dr. Michael Worobey, UArizona BIO5 Institute associate director and Head of the Department of Ecology and Evolutionary Biology, uses the complete set of viral genetic material to trace the evolution of major communicable diseases like HIV, influenza, and now SARS-CoV-2.

During his February 15 Precision Wellness in the Time of COVID-19 lecture, Worobey shared how he and colleagues used the power of genomics to shed light on these pandemic origin mysteries.

“This year has been quite a year of uncertainty and the ‘what abouts,” said Dr. Floyd “Ski” Chilton, Director of The Precision Nutrition & Wellness Initiative (PNWI) and event host. “This series is focused on answering those questions. Over the last year, Worobey’s kept me informed about the ‘what abouts.’”

Worobey transported the virtual audience back to December 2019 when 2019-nCoV (the original name for SARS-CoV-2) was detected in Wuhan, China. Despite an aggressive quarantine of Wuhan residents and travelers, the World Health Organization declared the viral outbreak a world health emergency on January 31, 2020. However, many scientists like Worobey already knew a pandemic was on the horizon.

“It was clear much before then that this was not only an emergency, but almost certainty going to result in another pandemic,” Worobey said to an audience of 160 scientists, physicians, community members, reporters and UArizona personnel.

After the first few cases of COVID-19 in Washington state were documented in early February 2020, Worobey says researchers and physicians were “flying blind.” The scientist recalls a six-week period during which the research community was unsure if cases in the U.S. were purely travel-based – that is, only caused by travel to or contact with someone who recently traveled to China – or if there was community spread.

Using the power of genomics, scientists in Washington state sequenced and compared the viral genomes of infected individuals. The sequences were nearly identical. Scientists also examined unrelated samples from local influenza patients and shockingly found their first 2019-nCoV-positive sample in an unsuspecting individual – a high school student without any link to China.

Worobey calls the impact of these findings a “wake-up call to the whole nation,” as it was clear that there were likely thousands of individuals more who might be infected in Washington state alone, regardless of whether they had any direct connection to China or a traveler.

Scientists also found that the novel coronavirus genomes were most closely related to a bat virus, though researchers speculate that there was likely an intermediary animal such as a cat who likely passed the virus from bats to humans.

After determining the similarity between Washington cases, Worobey and colleagues set out to determine the precise origins of our nation’s outbreak. At the onset of the pandemic, many assumed that transmission from China to Washington state was the key link that led to the larger U.S. outbreak.

Through genome sequencing and phylogenetic (evolutionary) relationships, Worobey and colleagues discovered that early-February 2020 interventions like strict quarantines largely prevented the spread of initial China-linked Washington state cases. Instead, transmission of the virus from China to Italy and then to New York City in mid-February “founded the earliest, sustained European and North American transmission networks.” In fact, prior to the recent emergence of the new variant, nearly all viral sequences from Arizona patients trace back to Italy.

Work from Worobey and others also challenged the notion that the virus didn’t appear until December 2019. Instead, these scientists speculate that human viral transmission occurred two months earlier, but very few were infected – or knew they were infected – until the end of December.

The new U.K. variant, B.1.1.7, has a small mutation in the gene which encodes its spike protein. Coronavirus spike proteins protrude off the virus’s surface and are essential for entering human cells through a receptor, or docking point, known as ACE2. Worobey used a Velcro analogy to explain the association of these two proteins: If the spikes are akin to Velcro hooks, the ACE2 receptors are the fuzzy parts. Once the connection is made, the virus enters our cells and hijacks cellular machinery to make more copies of itself.

Though important for viral infection, scientists can use these sticky spike proteins to their advantage. A vaccinated person, or even one who has been naturally infected, produces antibodies (“custom drugs,” according to Worobey) that bind to the spike proteins and inhibit interactions with ACE2 – thus, the virus can’t enter our cells if antibodies are present.

While the spike protein mutation in the U.K. variant makes it easy for geneticists like Worobey to identify, it also poses a challenge for existing vaccines that target the spike protein of the original strain. Using statistical models, Worobey estimates that by mid-March most COVID-19 cases in the U.S. will be a result of variant transmission. Other variants are emerging in South Africa and Brazil, as well, all of which seem to spread more easily and quickly than the initial strain.

Thus, the scientific and medical communities, along with the Centers for Disease Control and Prevention and the World Health Organization, urge everyone to continue to do their part to slow the spread of disease. Even those who have been vaccinated or naturally infected are encouraged to wear a mask, practice social distancing and avoid crowds, especially those indoors.

If we continue to diligently follow these measures, Worobey is hopeful COVID-19 will turn into the common cold.

“Semi-normal life is on its way,” Worobey concluded.

Worobey’s lecture is part of a five-symposia series hosted by the BIO5 Institute and The Precision Nutrition & Wellness Initiative (PNWI). Please visit the PNWI website to learn more and register for upcoming talks.