Inspiring Next Generation of Diverse STEM Professionals with Metals, Microbes and Music 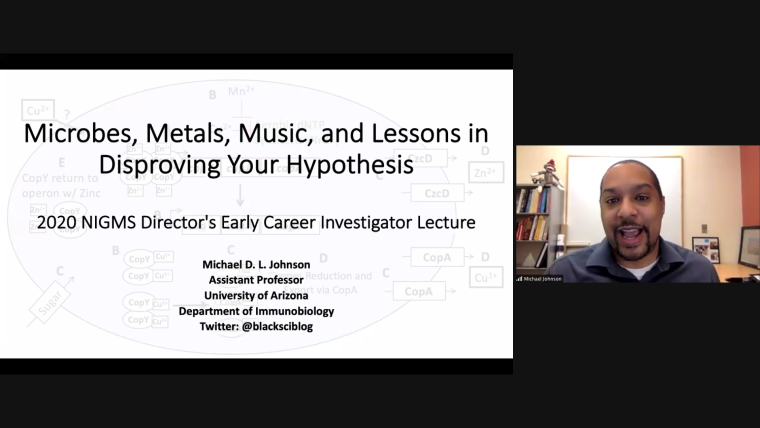 Music, metals and microbes are connected by more than just a leading consonant – for Dr. Michael Johnson, these three subjects harmonize to inspire his creativity and discovery.

Though he entered college with a goal to pursue veterinary medicine, Johnson majored in music because it brought him joy. As a music major at Duke University, the young trumpet player was inspired by the ingenuity of the “rule-breaking” composers he studied in music theory class.

After a summer balancing a job in an animal hospital and attending tutoring sessions for the “dreaded weed-out course” of organic chemistry, Johnson knew he was no longer interested in veterinary medicine – but he didn’t know where to go from there.

“I could only assume God was trying to set me on a path of what to do with my life,” Johnson wrote in a post on his blog, BlackScienceBlog.

With that nudge from “divine intervention” and a lift from “serendipity,” Johnson pivoted his initial pursuit of music and veterinary science to pharmacology, ultimately building his current career at the intersection of biochemistry and microbiology with an emphasis on how metals like copper impact bacterial infections.

Though Johnson traded his trumpet for a pipet, the motivating role models from Johnson’s music theory class continue to shape the way he thinks about science.

Recently, Johnson shared his interweaving passions for metals, microbes and music during the 5th Annual National Institute of General Medical Sciences Director’s Early Career Investigator Lecture. Being asked to give an annual lecture is a prestigious honor for early career investigators working at the cutting-edge of science. The talk aims to inspire and encourage undergraduate students to pursue careers in biomedical research – another passion of Johnson’s.

“Like music, science has a lot of rules,” shared Johnson, assistant professor of immunobiology and member of the BIO5 Institute. “I’m not saying you can break those rules, but knowing what they are and being able to creatively use them is something that makes science enjoyable. It can help you push on the limits of human knowledge to be the first to discover something.”

Through a symphony of comical research anecdotes, relatable analogies and perfectly placed music references, Johnson’s messages of flexibility and creativity remind us that our setbacks don’t define us – they transform us.

To combat an infection, scientists often use a microbe’s essential function or feature as its own kryptonite.

Bacteria have a sophisticated system to recognize and export the harmful metal. In the absence of copper, the CopY protein suppresses the expression of itself and two others essential to eliminating the harmful metal: CupA and CopA. When bacteria and copper collide, CopY’s inhibitory role is reversed.

Johnson found that when he eliminated the expression of CopA and impaired bacteria’s ability to alleviate copper stress infection dramatically decreased, and thus the export system could be used as a potential therapeutic target.

Because CopY controlled the expression of CopA, Johnson hypothesized it must be the critical factor that ultimately enabled bacteria to overcome copper stress and cause disease – a hypothesis he was quite confident about, writing several grants and job applications and even partly securing his own position at UArizona on this idea.

But as he and molecular medicine graduate student Henrik O’Brien began examining the CopY protein in greater detail, Johnson was surprised to learn that his initial hypothesis was incorrect.

Instead of letting the failure of a hypothesis that he had built his new career on cripple him, Johnson took it in stride.

“Sometimes hypotheses aren’t correct, and that’s okay,” Johnson said to his audience. “You are not defined by your hypothesis.”

Drawing upon inspirations of musical ingenuity, Johnson stepped back to reassess the process behind the outcome. Just as every good musician tunes their instrument, Johnson fine-tuned his hypothesis and experiments to ultimately understand that the complex relationship between copper and bacteria made more sense when a third instrument – sugar - was involved

Because he was not limited to the outcome of his initial proposition, Johnson’s preliminary data suggests that copper stress decreases the import of sugar by bacteria, enabling the bacteria to overcome the toxic grasp of the host – though the exact details are yet to be discovered.

“This is the fun part about science,” Johnson said. “You are trying to figure out how all the pieces go together to facilitate the function of the whole. You never know when the missing piece will appear or when, even if you have all the pieces, the pieces will reveal the larger picture.”

Inspiring the next generation of scientists
Johnson’s NIGMS Director’s Early Career Investigator Lecture is just one example of his dedication to STEM mentorship and outreach.

Students like O’Brien who work in Johnson’s lab learn from Johnson’s ability to find the positive aspects in a failed hypothesis and work creatively to uncover other possibilities.

“What Dr. Johnson has taught me that it’s not about being right or wrong, but about following the data. You can't take it personally or feel it diminishes your merit as a scientist if your hypothesis is wrong,” O’Brien said. “If you were wrong that's okay, because now you have a larger set of information to form new hypotheses and inform future work.”

During his postdoctoral fellowship, Johnson founded Science Sound Bites, a science podcast for kids. Today, he continues to engage the academic and larger communities through DNA Day, minority scientific affairs through the American Society for Microbiology, and his Twitter account.

Johnson also founded the BIO5 Postdoctoral Fellowship Program, an internal funding mechanism for outstanding UArizona postdoctoral researchers who are engaging in research projects aligned with the mission of the BIO5 Institute.

As a person of color, Johnson feels a great responsibility to create opportunities that empower underrepresented students.

Many campuses and laboratories have either entirely closed or been severely restricted due to the pandemic. These necessary limitations have prohibited undergraduate students – most disproportionately BIPOC students – from engaging in research opportunities essential to advancing their personal and professional goals. Johnson witnessed this barrier first-hand as a McNair scholar was unable to work in his lab this summer because of COVID-19.

To provide the most disadvantaged students with a rewarding remote summer research experience and vital step towards a career in STEM, Johnson – along with David Baltrus, BIO5 member and associate professor in the School of Plant Sciences, and Jennifer Gardy at the Bill & Melinda Gates Foundation’s Global Health Division – founded the community-driven NSURP initiative.

The program paired 250 undergraduate students from nearly 150 universities across the country – more than half of whom are first generation college students – with microbiology laboratory mentors from across the country. Students were provided with access to BIPOC seminar speakers and online professional development lectures, as well as given the opportunity to present their research virtually.

Mentors were enabled with the tools to support their students through access to anti-racism mentoring and diversity training resources.

In a reflective commentary published in Nature Microbiology, Johnson, Baltrus and Gardy express that they hope NSURP serves as an example for future match-making programs that emphasize diversity, equity and inclusion in the STEM fields:

“While the NSURP programme is not the first to match people based on their interests, it is at the forefront of doing so at this scale, and with respect to virtual research projects for underrepresented and underserved undergraduates. As such, we hope NSURP will be a template for others to follow to engage a diverse, representative set of future scientists.”

Though the program was initially created to provide opportunities for students during the summer of 2020, Johnson hopes to expand the program so long as resources are available.

“We really hope to grow NSURP to facilitate providing research opportunities for those who not only might still miss out on an in-person opportunity next year, but also for those who could not travel in the first place – a population that became front and center in this program,” Johnson said. “To do this, we really need support, as bandwidth is low, but demand is high!”