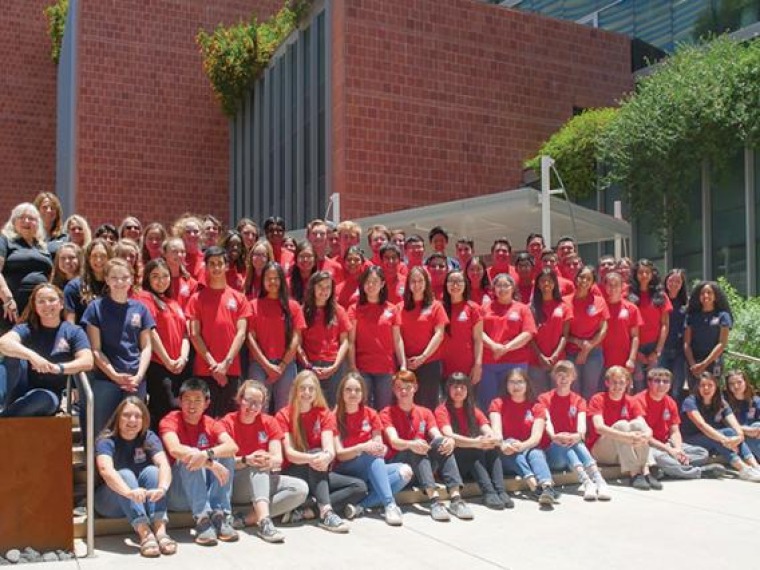 Learn more about KEYS
Past BIO5 KEYS interns continue to excel in the STEM fields by achieving prestigious awards, pursuing advanced degrees and giving back to the program.
Brittany Uhlorn, BIO5 Institute

For the past 13 years, the BIO5 Institute at the University of Arizona has hosted a seven-week summer research internship for talented Arizona high school students. The Keep Engaging Youth in Science (KEYS) program has provided this one-of-a-kind bioscience research opportunity to 526 talented students to date. The program allows students to explore their passions for scientific discovery while advancing their academic, professional and personal goals.

Past interns advanced STEM fields by contributing data to their mentors’ research grant applications and publications. Some have presented their work at local and national conferences, and many students continue to work in UArizona research laboratories following the conclusion of the program – even some of those still in high school.

The more than 500 alumni have used their KEYS experience as a launching point for their careers in STEM. Nearly all of those who have graduated high school either attended or are currently attending college to pursue a STEM education. About 75% of KEYS alumni have chosen to attend college in Arizona, with the majority of those attending UArizona.

Outside of Arizona, past interns have attended elite schools such as Brown University, Massachusetts Institute of Technology, Stanford University, Yale University, and Harvard University. Of those who have graduated from college, many have completed or are in the process of completing advanced graduate and professional degrees such as master’s degrees and doctorates in medicine, pharmacy, philosophy and dental science.

Jason Juang participated in KEYS the summer after his senior year at Corona del Sol High School in Tempe. The hands-on research opportunity provided an experience much different than his lecture-based science education in high school. Through KEYS, Juang learned several techniques that helped him secure an undergraduate research position as a freshman at UArizona.

Juang also learned a great deal about science writing and communication through the program. He still remembers learning how to make a scientific poster, step-by-step, for the KEYS summer showcase.

“KEYS gives you the skills you need to communicate science, write an abstract and make a poster. Taking things slow really helped me learn the proper way to communicate science. The program has really helped me with anything I’ve done in college, like writing lab reports and creating my Undergraduate Biology Research Program (UBRP) posters,” Juang said.

Juang’s fondest memories of his time in KEYS are those made in the dorms. After a long day in the lab, he always looked forward to catching up with his cohort, and he even keeps in touch with some of his fellow interns. Juang also served as a KEYS resident assistant for two years as an undergraduate at UArizona because he wanted to make sure the new classes of KEYS students had the same positive experience he did.

A recent graduate with a bachelor’s degree in biochemistry from UArizona, Juang is now pursuing a doctorate of medicine in dentistry at the Harvard School of Dental Medicine. He aims to specialize in dentistry for people with disabilities because these populations often have extremely poor access to dental care. Juang plans to continue conducting research in dental school, adapting the skills he learned as a KEYS intern and undergraduate to begin either a public health or clinic-based investigation.

Aradhana Kasimsetty participated in the KEYS program after her junior year at Desert Vista High School in Ahwatukee. Prior to her summer internship, she was unsure about a career in research, but her experience working in a pharmacology and toxicology lab as a KEYS intern opened her eyes to a world of possibilities.

“Before KEYS, I wasn’t completely sure I wanted to do research, but working in a lab made me realize how much I enjoyed being a researcher. It was definitely a really formative experience,” she said.

A recent graduate from Arizona State University with a bachelor’s degree in medical microbiology and an accelerated master’s degree in biology, Kasimsetty is now pursuing a doctorate in cellular and molecular biology with an emphasis on gene therapy at the University of Pennsylvania. She wholeheartedly believes her KEYS internship not only enabled her to get a position in a research lab just two months into her freshman year at ASU, but also served as a catalyst for her acceptance into the doctorate program.

“I believe that I got accepted to my Ph.D. program because I had so much undergraduate research experience,” Kasimsetty said. “My mentor at ASU told me that he didn’t accept freshmen, but since I had prior experience from KEYS, he accepted me. In a way, my time at KEYS was extremely important for my career trajectory.”

Following in the footsteps of his older sister, Ryan Hunt was admitted to the KEYS program the summer after his junior year at Mountain View High School in Marana. At the time, he thought he was simply engaging in a summer research opportunity that would provide a deep dive into environmental science, but he didn’t realize it would open several personal and professional doors.

“I didn’t know it was the start of so much more,” he said.

Under the direction of Dr. Laura Meredith, assistant professor in the School of Natural Resources and the Environment, Hunt resumed the same rainwater harvesting project he began as an intern as a freshman at UArizona in 2019. Using soil from the rainforest at Biosphere 2, Hunt studies the utility of different green infrastructure technology in restoring the permeability of soil in arid regions, such as Arizona, with the ultimate goal of mitigating flooding and restoring watersheds. Some of the protocols Hunt developed are still in use in the Meredith lab, two years later.

Hunt returned to KEYS as a KEYS Crew member in 2019. Though he lacked mentoring experience, he was tasked with taking photos of the interns and creating social media posts for the program. Hunt says KEYS has prepared him to quickly adapt to address challenges by learning as he goes. His creativity and ability to learn on his feet was recognized by BIO5 staff, and he was hired as a BIO5 Public Affairs Student Assistant not long after. Hunt now uses his background in traditional art to help him with graphic design for the institute.

“I’m just taking what I know about composition and transferring that knowledge into the digital side of things,” Hunt said.

Passionate about both environmental science and art, Hunt desires to find an intersection between the two in a future career. Through his work on the BIO5 Public Affairs team, he has realized that art can be a powerful form of science communication.

About KEYS
The KEYS program is led by the BIO5 Institute and is funded by BIO5 and generous supporters including individuals, families, companies, foundations and various UArizona faculty, colleges and departments. The Technology and Research Initiative Fund (TRIF) that helped launch BIO5 almost 20 years ago continues to be a catalyst in enabling effective, cross-disciplinary bioscience research, innovation and impact at the University of Arizona. Further, it enables world-class student engagement programs like KEYS.

Over the past 20 years of TRIF, over $50M has been invested in building critical facilities and research services that UArizona is leveraging today to quickly and robustly respond to the current COVID-19 crisis. TRIF allows the flexibility to pivot and repurpose campus resources to engage in the complex fight against COVID-19, drawing on faculty expertise, campus facilities, logistical assets, research labs, and campus staff and leadership to provide immediate assistance in the battle against the pandemic.