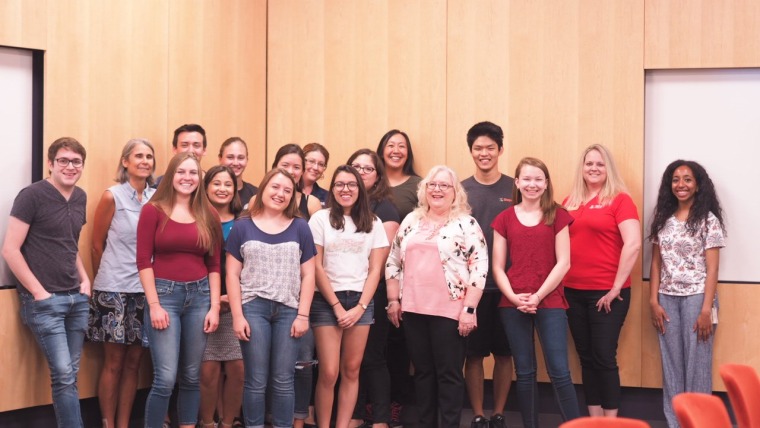 Launched in 2007 as the brainchild of Dr. Marti Lindsey, Community Engagement Director for the Southwest Environmental Health Sciences Center at the UArizona College of Pharmacy, the Keep Engaging Youth in Science (KEYS) program has provided 526 gifted Arizona high school students with the research experience of a lifetime. Through this seven-week summer internship, students engage in basic bioscience and data science research and develop science literacy and presentation skills.

Now celebrating its 15th year, the BIO5 Institute KEYS program continues to provide students with real-world applications of the concepts they read about in textbooks. Bright high school students are not only challenged by this internship, but they are stretched and molded into poised leaders of tomorrow.

“When you do something difficult, and you do it very well, then authentic self-confidence and the knowledge you can do anything, is born,” said Lindsey, the self-proclaimed “grandma” of KEYS.

A vision for success

KEYS was imagined in 2005 when Lindsey and colleagues were asked to provide a research-based capstone project for a local high school student. After that initial pairing, Lindsey matched a few more Tucson high schoolers with UArizona researchers over the next two years.

From these small trials, Lindsey and her team quickly learned how to provide budding scholars with an opportunity that would both challenge and prepare them for professional success. With support from former BIO5 director Dr. Vicki Chandler and funding from the Technology and Research Initiative Fund (TRIF) that helped establish BIO5 in 2001, Lindsey launched the KEYS program in the summer of 2007.

Nine local high school students were selected to engage in the inaugural five-week training program composed of three biotechnology training days led by Dr. Nadja Anderson, BIOTECH Project director at UArizona, four weeks of laboratory research, and a final poster presentation. Prior to the program, students completed pre-KEYS assignments and wrote weekly reflection blog posts during the program. The interns were also surprised with a small stipend for their work.

The mission for KEYS has always been simple: provide the brightest Arizona high school students with an opportunity to develop new knowledge, learn new skills, and gain authentic self-confidence. To Lindsey, the final tenant was immensely important. The students recruited to the program were accustomed to academic success and leadership roles. With the KEYS program, Lindsey wanted to push the already accomplished students to their limits using the educational technique known as the “zone of proximal development.”

To employ this strategy, the KEYS interns were continually stretched, little by little, while being provided with resources and mentor support to help them overcome their challenges. By fostering growth at an incremental rate, the interns are simultaneously challenged and instilled with the confidence they needed to succeed.

“KEYS stretches the students every single week so that they come in saying, ‘I can’t do that,’ and at the closing program, the Research Showcase, they are capable of conducting difficult research, writing, printing, and presenting the poster, and answering questions they clearly were not prepped for,” Lindsey said.

The first class of KEYS was “stellar” according to Lindsey, producing several health care professionals, scientists, and engineers. However, Lindsey quickly realized that while the students could tackle the program’s trials, they needed additional support.

Two students from the inaugural class joined the 2008 cohort as a “near-peer mentors” to provide incoming interns with relatable advice and mentorship. KEYS Crew, a group of more than five undergraduate student mentors for each KEYS class, had officially been born. KEYS Crew adds to what Lindsey calls a “constellation of mentors,” including the co-directors, student staff, peers, faculty and lab mentors, and parents, that are essential to guiding the students through their summer journeys.

In addition to creating a mentorship system, KEYS expanded to 48 students annually from 2008-2012 with encouragement from former BIO5 director Dr. Fernando Martinez. To support the longevity of the program, students received three general science college credits for their work instead of a stipend. Thomas Keating, longtime contributor to the BIO5 Institute, provided the financial support to open the program state-wide, housing select students on campus during the program. The College of Science helped KEYS grow to 50 with funding for two physical sciences research interns.

The program’s format also morphed in its first few years. Based on the advice of faculty mentors, the program has expanded to seven weeks so students can make a tangible impact, like authorship on manuscripts. Training is now one full week to ensure interns are fully prepared with science literacy and biotechnology skills prior to “dirtying their hands” at the bench. Weekly seminars provide professional development and address group concerns raised in reflections or during meetings with Crew members.

The students also refined their presentations throughout the program. By spending ample time on their science writing, poster design, and speaking skills, students were well-equipped to present with confidence and answer unpredictable questions at the Research Showcase. Lindsey says that while not all interns pursue a research career, the science literacy, presentation and problem-solving skills they learn during KEYS are widely applicable to many professions.

Great emphasis was also placed on the social aspect. According to Lindsey, the KEYS program gives incredibly talented students the chance to interact and realize that there are many other intelligent people in the world their age to connect with and learn from.

“We give them a research experience, but they get out so much more,” she said.

During the early years, Lindsey served as a direct mentor to the students. She interviewed applicants, provided feedback on reflections, conducted the science literacy training, and met with the students throughout the program to ensure their success. According to current co-director Brooke Moreno, also a KEYS intern in 2009, Lindsey “pushes interns in a nurturing way” to ensure they achieve success while in the program. Further, Lindsey’s impact extends years beyond an intern’s summer experience as she writes letters of recommendation and continues to create personal and professional opportunities for alumni.

Marissa Romero, former KEYS Crew member and outreach and engagement specialist at BIO5, adds that Lindsey is “meaningful with her words,” taking the time to sit with every student to make sure they have the support they need.

“She’s everything you want from a mentor and more,” Romero said.

KEYS of the future

In 2020, the traditionally hands-on KEYS research experience was swiftly transitioned to a virtual program amid the COVID-19 pandemic. Dr. Uwe Hilgert, associate research professor and director of industry relations, workforce development and STEM training at BIO5, was critical in preparing the students for their big data-focused projects.

This year in celebration of the program’s 15th anniversary, KEYS is welcoming its largest cohort to date. Playing off the success of last year’s program, 52 outstanding Arizona high school students will embark in the virtual version of KEYS to tackle some of the most pressing research questions in the data sciences.

Since the program’s inception in 2007, 526 alumni and counting have made tangible contributions to scientific research and the bioscience workforce. According to Lindsey, KEYS is a “trajectory changer” that transforms the students from “resume booster” seekers into junior scientists who are both capable and confident.

This year also marks Lindsey’s final year with KEYS as she transitions into retirement. To prepare current co-directors Moreno and Kelle Hyland, Lindsey’s been the “rudder on a boat that tells you where you’re going and gives you gentle nudges to go in the right direction.” With Moreno and Hyland leading the boat, Lindsey is confident her KEYS brainchild is in good hands.

When asked what she envisions for the KEYS of the future, Lindsey sees two cadres – an idea made possible by the unpredicted transformation of KEYS to a virtual format. One cohort would pursue traditional lab bench research while the other navigates projects involving big data.

Ultimately, Lindsey hopes the program continues to support research and education missions of the university while upholding the original mission of the program.