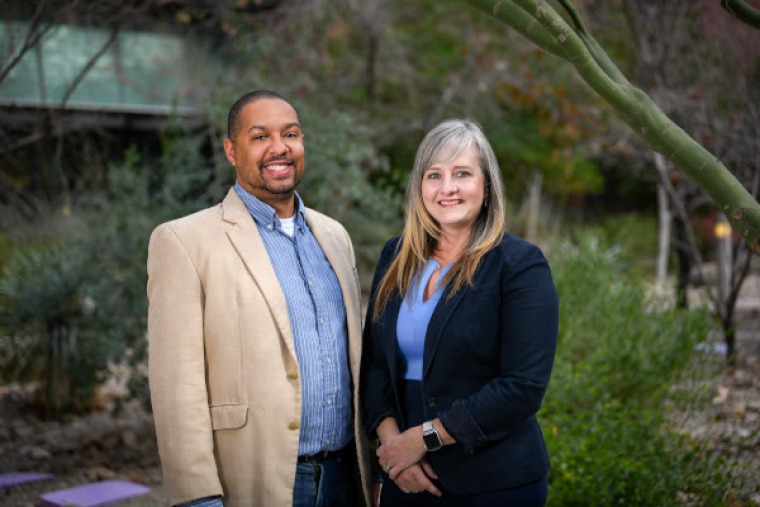 Though trained at rival institutions, Drs. Julie Ledford and Michael Johnson formed a friendship over a mutual love of science and their daughters that has led to an RO1 grant and recent publication.
Brittany Uhlorn, BIO5 Institute

Like the University of Arizona’s rivalry with “that school up north,” the competition between Duke and the University of North Carolina runs deep. Though a work partnership – let alone a friendship – seemed unlikely when they met in 2017, former North Carolinians Drs. Michael Johnson and Julie Ledford found common ground through their daughters and their love for science.

Both members of the BIO5 Institute, Johnson, an assistant professor of immunobiology, teamed up with Ledford, associate professor of cellular and molecular medicine, to determine the mechanistic role for a biomarker of obstructive lung diseases. The collaboration has not only led to a successful $2.5 million R01 grant, but the team recently published their field-shifting findings in the American Journal of Respiratory and Critical Care Medicine.

Mentorship, kindergarten and collaboration
The pair was initially united by the College of Medicine’s Faculty Fellows Program. Spearheaded by CoM’s Office of Diversity, Equity and Inclusion, this initiative is intended to support the budding careers of new, underrepresented minority faculty members. Ledford and Johnson were paired with BIO5 member Dr. Felicia Goodrum and Associate Director for Cancer Research Training & Education Coordination Dr. Margaret Briehl, respectively. These mentors served as invaluable resources on topics including promotion and tenure, laboratory leadership, and managing conflict.

During a group outing at a local pizzeria, the two realized their daughters would be attending the same kindergarten later that year. Since they’d likely be seeing a lot of each other in the future, Ledford and Johnson decided it would be best to try to put their institutional rivalry aside and meet for coffee – but their competitive history didn’t make a scientific collaboration seem likely at the time.

“We didn't immediately know we were going to work together because we were from rival institutions. The Duke-UNC basketball rivalry is a very big deal, so we immediately thought there could be friction,” joked Ledford, who is also an associate professor of clinical translational sciences and medicine.

While sipping coffee and talking about their children, the conversation naturally shifted to their research. Ledford, a respiratory disease scientist, told Johnson about a problem she was having with a project.

Based on the work of Asthma and Airways Disease Research Center collaborators Drs. Fernando Martinez and Stefano Guerra, Ledford knew that a protein produced in the lung – CC16 – served as a critical biomarker for obstructive lung diseases like asthma and COPD. Higher levels of CC16 in the blood have been associated with protection from both the inception and progression of these respiratory diseases, but it was unknown exactly how the presence of a lung protein in the blood mediated disease.

Ledford desired to push the field in a new direction by determining the mechanism behind this biomarker. Though she had a rodent model of airway hyperresponsiveness ready to test the role of CC16, she needed outside expertise to determine which proteins the biomarker might be interacting with.

Johnson, trained in protein biochemistry, asked Ledford to email him more details about the project later that night.

“I really like understanding how proteins work,” Johnson said. “CC16 was the perfect bite of a protein to be able to look at and say, ‘I wonder what this thing does?’”

As a testament to his collaborative spirit and enthusiasm about the project, Johnson called Ledford back within an hour of receiving her email.

“I almost fell off my chair!” Ledford recollects about the moment she received his call.

In that moment, their scientific partnership was born.

It takes a village
Since there were countless potential partners for CC16, both in the lung and blood, Johnson knew traditional techniques were out of the question. After examining the amino acid – the basic building blocks of protein – sequence, Johnson was amazed to find that a particular three-amino acid sequence he studied in graduate school was conserved in CC16 across several species.

This clustering of protein building blocks was known to be an integrin binding motif. More simply, just those three amino acids enable CC16 to bind to special receptors (integrins) that enable cells to attach to each other and to the foundation (extracellular matrix) upon which they sit in our tissues.

Through their teamwork, the group learned the conserved sequence of amino acids facilitated cell binding to VLA-4, an integrin involved in the recruitment of leukocytes, or white blood cells. By modifying the sequence of CC16 using recombinant DNA technology, Johnson produced a mutant protein unable to bind the integrin.

After comparing wildtype CC16 to the one lacking the special motif using both Ledford’s airway disease model and a cell binding assay, Johnson and Ledford found that loss of the binding site impaired the function of CC16 in lung infection and inflammation. Namely, they found that the ability of CC16 to bind integrins via its conserved sequence is critical in improving lung function and decreasing the recruitment of inflammatory cells to the lung, thereby alleviating disease burden.

Since paving this new direction for the field of obstructive respiratory disease research, the team is hopeful their work will lay the foundation for recombinant CC16 or VLA-4 therapeutics to help prevent and mediate lung diseases.

An alliance for years to come
The former North Carolina rivals don’t plan to end their collaboration anytime soon. By combining their expertise and techniques, they aspire to determine the precise location(s) of CC16-VLA-4 interactions, as well as how the protein can mediate the clearance of bacteria from the lung.

At the end of the day, Johnson and Ledford aren’t just grateful for their scientific partnership – they are thankful for their unlikely friendship which also extends to their families.

“It’s really nice to have these types of relationships with people because it illustrates why we do science and who the science impacts. If we’re not having fun doing it, if we're not forming relationships and fellowship, then it would be a really boring and awful field,” he added. “The fact that we can sit down, be able to break bread together, and then also talk about science…it’s just a really good feeling, and I’m lucky that I have the opportunity to have that.”