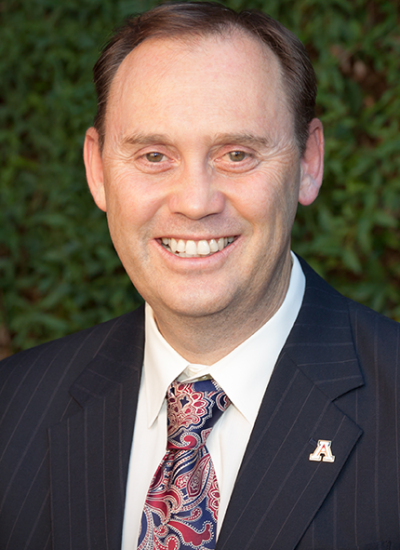 Shane C. BurgessVice President for Agriculture, Life and Veterinary Sciences, and Cooperative ExtensionDean, College of Agriculture and Life SciencesInterim Dean, School of Veterinary MedicineDirector, Arizona Experiment StationA native of New Zealand, Dr. Burgess has worked around the world as a practicing veterinarian and scientist. His areas of expertise include cancer biology, virology, proteomics, immunology and bioinformatics.Since 1997 he has 186 refereed publications, trained 37 graduate students and has received nearly $55 million in competitive funding.The first in his extended family to complete college, Dr. Burgess graduated with distinction as a veterinarian in 1989 from Massey University, New Zealand. He has worked in, and managed veterinary clinical practices in Australia and the UK, including horses, farm animals, pets, wild and zoo animals, and emergency medicine and surgery. He did a radiology residency at Murdoch University in Perth in Western Australia, where he co-founded Perth's first emergency veterinary clinic concurrently. He has managed aquaculture facilities in Scotland. He did his PhD in virology, immunology and cancer biology, conferred by Bristol University medical school, UK while working full time outside of the academy between 1995 and 1998. Dr. Burgess volunteered to work in the UK World Reference Laboratory for Exotic Diseases during the 2001 UK foot and mouth disease crisis, where he led the diagnosis reporting office, for the Office of the UK Prime Minister Tony Blair. He was awarded the Institute for Animal Health Director's Award for Service.In 2002, Dr. Burgess joined Mississippi State University’s College of Veterinary Medicine as an assistant professor. He was recruited from Mississippi State as a professor, an associate dean of the college and director of the Institute for Genomics, Biocomputing and Biotechnology to lead the UA College of Agriculture and Life Sciences in July 2011. Under Dr. Burgess’ leadership, the college has a total budget of more than $120M with over 3,400 students and more than 1,800 employees.

A high spectral contrast is expected to be very important when laser-induced fluorescence (LIF) is employed for cancer diagnosis. We developed a LIF optical fiber sensor to achieve a very high spectral contrast between normal and malignant tissues. A comprehensive experimental investigation was carried out to study the role of two critically important parameters for sensor design, namely, the excitationcollection geometry and the excitation wavelength, and their effect on the autofluorescence spectral contrast. An optimum sensing configuration was determined in order to enhance the small, but consistent, spectral difference between the normal and the malignant tissue for improving the accuracy of LIF-based cancer diagnosis. With the optimum sensor configuration, we realized a spectral contrast of more than 22 times between normal and malignant tissue sample spectra. © 2008 Optical Society of America.

Understanding the effects of viral infection has typically focused on specific virus-host interactions such as tissue tropism, immune responses and histopathology. However, modeling viral pathogenesis requires information about the functions of gene products from both virus and host, and how these products interact. Recent developments in the functional annotation of genomes using Gene Ontology (GO) and in modeling functional interactions among gene products, together with an increased interest in systems biology, provide an excellent opportunity to generate global interaction models for viral infection. Here, we review how the GO is being used to model viral pathogenesis, with a focus on animal viruses. © 2009 Elsevier Ltd. All rights reserved.

The Avian Genomics Conference and Gene Ontology Annotation Workshop brought together researchers and students from around the world to present their latest research addressing the delivery of value from the billions of base-pairs of Archosaur sequence that have become available in the last few years. This editorial describes the conference itself and introduces the ten peer-reviewed manuscripts accepted for publications in the proceedings. These manuscripts address issues ranging from the poultry industry view of USDA genomics policy to the genomics of a wide variety of Archeosaur species including chicken, duck, alligator, and condors and their pathogens. © 2009 Bridges et al; licensee BioMed Central Ltd.