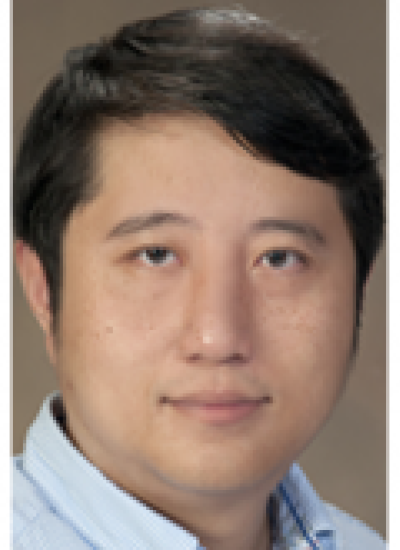 Yin Chen, PhD. is an Assistant Professor in Pharmacology and Toxicology in the College of Pharmacy at UA. Dr. Chen’s research focus is on epithelial biology. He was a research faculty in University of California, Davis and an Assistant Investigator in Chemical Industry Institute of Toxicology (former CIIT and later Hamner Institute). His long-term research objective is to understand the dysfunction of airway epithelial mucosa in the pathogenesis of a variety of acute and chronic airway diseases. His current research programs are: a) understanding the molecular mechanisms underlying airway mucous cell development and mucous cell metaplasia in chronic diseases including cancer, COPD and asthma; (b) understanding the function and regulation of novel COPD associated genes and developing novel compounds to treat COPD; (c) understanding the impact of fungal exposure on airway innate immunity and its contribution to the development and exacerbation of asthma. Dr. Chen has more than 30 publications including peer-reviewed research articles, reviews and book chapters. He has served as the PI on one R01, two R21, one Flight Attendant Medical Institute (FAMRI) Innovative Clinical Award and one Arizona Biomedical Research Commission Award. He has also served as co-PI on two R01 and one P01 grants. He has built a long productive track record in studying airway mucus production and respiratory viral infection using primary airway epithelial cell model. He routinely cultivate and use primary epithelial cells from eye, salivary gland, airway surface and submucosal gland in different species (e.g. human, monkey, pig, rat and mouse) as our in vitro model to study mucin genes. The differentiated primary culture model demonstrates pseudostratified morphology, is composed of ciliated, non-ciliated, and goblet cells, and has a transepithelial barrier with high electro-resistance. He has also established in vivo exposure system to study the pulmonary effect of the exposure to particulates, pathogens and gases. Using this system, he has developed various airway disease models including CS-induced COPD model, ovalbumin-induced asthma model, fungal-induced asthma model and several infection models such as H1N1, rhinovirus, Aspergillus, and Alternaria.

Macrophages stand at the forefront of both innate and adapted immunity through their capacities to recognize, engulf, and eliminate foreign particles, and to stimulate adapted immune cells. They are also involved in controlling pro- and anti-inflammatory pathways. Macrophage activity against Mycobacterium tuberculosis (M. tuberculosis) has been shown to involve Toll-like receptor (TLR) activation and ROS production. Previous studies have shown that lipopolysaccharide (LPS), through TLR4, could activate macrophages, improve their bactericidal ROS production, and facilitate anti-infective immune responses. We sought to better understand the role of the TLR4-NOX2 axis in macrophage activation during M. tuberculosis infection.

CCL20, like human β-defensin (hBD)-2, is a potent chemoattractant for CCR6-positive immature dendritic cells and T cells in addition to recently found antimicrobial activities. We previously demonstrated that IL-17 is the most potent cytokine to induce an apical secretion and expression of hBD-2 by human airway epithelial cells, and the induction is JAK/NF-κB-dependent. Similar to hBD-2, IL-17 also induced CCL20 expression, but the nature of the induction has not been elucidated. Compared with a panel of cytoldnes (DL-1α, 1β, 2, 3, 4, 5, 6, 7, 8, 9, 10, 11, 12, 13, 18, 16, 18, IFN-γ, GM-CSF, and TNF-α), IL-17 was as potent as IL-1α, 1β, and TNF-α, with a time- and dose-dependent phenomenon in stimulating CCL20 expression in both well-differentiated primary human and mouse airway epithelial cell culture systems. The stimulation was largely dependent on the treatment of polarized epithelial cultures from the basolateral side with IL-17, achieving an estimated 4- to 10-fold stimulation at both message and protein levels. More than 90% of induced CCL20 secretion was toward the basolateral compartment (23.02 ± 1.11 ng/chamber/day/basolateral vs 1.82 ± 0.82 ng/chamber/day/apical). Actinomycin D experiments revealed that enhanced expression did not occur at mRNA stability. Inhibitor studies showed that enhanced expression was insensitive to inhibitors of JAK/STAT, p38, JNK, and PI3K signaling pathways, but sensitive to inhibitors of MEK1/2 and NF-κB activation, suggesting a MEK/NF-κB-based mechanism. These results suggest that IL-17 can coordinately up-regulate both hBD-2 and CCL20 expressions in airways through differentially JAK-dependent and -independent activations of NF-κB-based transcriptional mechanisms, respectively. Copyright © 2005 by The American Association of Immunologists, Inc.

A major pathological feature of chronic airway diseases is the elevated expression of gel-forming mucins. NF-κB activation in airway epithelial cells has been shown to play a proinflammatory role in chronic airway diseases; however, the specific role of NF-κB in mucin gene expression has not been characterized. In this study, we show that the proinflammatory cytokines, IL-1β and IL-17A, both of which use the NF-κB pathway, are potent inducers of MUC5B mRNA expression in both well differentiated primary normal human bronchial epithelial cells and the human bronchial epithelial cell line, HBE1. MUC5B induction by these cytokines was both time- and dose-dependent, and was attenuated by the small molecule inhibitor, NF-κB inhibitor III, as well as p65 small interfering RNA, suggesting that the regulation of MUC5B expression by these cytokines is via an NF-κB-based transcriptional mechanism. Deletion analysis of the MUC5B promoter demonstrated that IL-1β- and IL-17A-induced promoter activity resides within the -4.17-kb to -2.56-kb region relative to the transcriptional start site. This region contains three putative κB-binding sites (NF-κB-1, -3,786/-3,774; NF-κB-2, -3,173/-3,161; and NF-κB-3, -2,921/-2,909). Chromatin immunoprecipitation analysis confirmed enhanced binding of the p50 NF-κB subunit to the NF-κB-3 site after cytokine stimulation. We conclude that an NF-κB-based transcriptional mechanism is involved in MUC5B regulation by IL-1β and IL-17A in airway epithelium. This is the first demonstration of the participation of NF-κB and its specific binding site in cytokine-mediated airway MUC5B expression.

Using microarray gene expression analysis, we first observed a profound elevation of human β-defensin-2 (hBD-2) message in IL-17-treated primary human airway epithelial cells. Further comparison of this stimulation with a panel of cytokines (IL-1α, 1β, 2-13, and 15-18; IFN-γ; GM-CSF; and TNF-α demonstrated that IL-17 was the most potent cytokine to induce hBD-2 message (>75-fold). IL-17-induced stimulation of hBD-2 was time and dose dependent, and this stimulation also occurred at the protein level. Further studies demonstrated that hBD-2 stimulation was attenuated by IL-17R-specific Ab, but not by IL-1R antagonist or the neutralizing anti-IL-6 Ab. This suggests an IL-17R-mediated signaling pathway rather than an IL-17-induced IL-1αβ and/or IL-6 autocrine/paracrine loop. hBD-2 stimulation was sensitive to the inhibition of the JAK pathway, and to the inhibitors that affect NF-κB translocation and the DNA-binding activity of its p65 NF-κB subunit. Transient transfection of airway epithelial cells with an hBD-2 promoter-luciferase reporter gene expression construct demonstrated that IL-17 stimulated promoter-reporter gene activity, suggesting a transcriptional mechanism for hBD-2 induction. These results support an IL-17R-mediated signaling pathway involving JAK and NF-κB in the transcriptional stimulation of hBD-2 gene expression in airway epithelium. Because IL-17 has been identified in a number of airway diseases, especially diseases related to microbial infection, these findings provide a new insight into how IL-17 may play an important link between innate and adaptive immunity, thereby combating infection locally within the airway epithelium.