Episode 11: Giving back through mentorship and opportunity 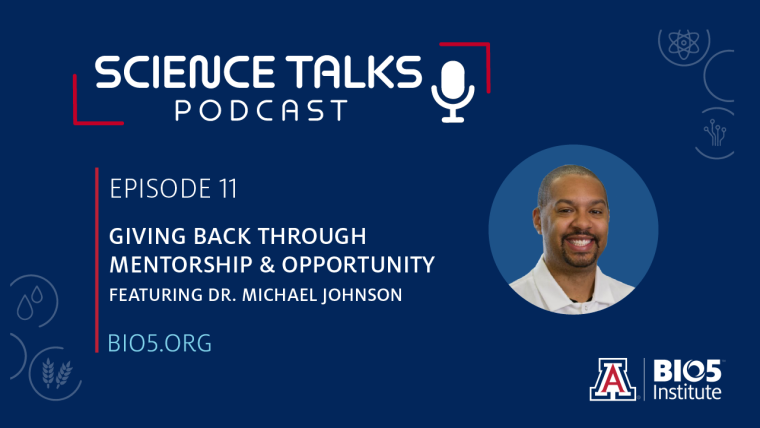 Dr. Michael Johnson discusses his passion for mentoring and outreach, and how being on the receiving end of this support has helped his professional growth.
Dr. Brittany Uhlorn, BIO5 Institute

Budding professionals, especially those representing historically underserved identities, greatly benefit from mentorship and programs designed to advance their educations and careers. Dr. Michael Johnson, assistant professor of immunobiology at the BIO5 Institute, discusses his passion for mentoring and outreach, as exemplified by two successful programs that he’s spearheaded in recent years: the BIO5 Postdoctoral Fellowship and the National Summer Undergraduate Research Project (NSURP).

You initiated the BIO5 Postdoctoral Fellowship in 2019. Talk to us about where the idea came from.

When I was a graduate student, I had a committee that kind of made or broke me as far as whether I passed or not, but what that committee is really supposed to be is a mentoring committee for your science and career development. I went on to my postdoc at St. Jude, and when you're postdoc, you're a mercenary. It's the wild, wild west. There's not as much structure as there was when you were a graduate trainee. Then you move past that stage, and you end up being a PI.

That was first major idea that went into the BIO5 Postdoctoral Fellowship - incorporating mentorship.

The second thing was something called the Matthew Effect. It's basically the idea that once you start getting money, more people will give you money, so once you get an award, people will start giving you more awards.

I wanted to create a yearly award that would give postdocs a chance at getting other awards, but I didn’t have the money to do that. I didn’t even know how to get the money for something like that – you can’t go to the NIH or NSF for that. It must come from institutional funds.

I went to Dr. Jennifer Barton, and I said, “Hey, I got a crazy idea,” and she goes, “What is it this time?” She's been very kind and entertaining some of my wild and outlandish kind of ideas. But this one, she actually thought it was a good idea and wanted to cultivate it some more. I wrote up a report, and she came back to me with money to do it. In that moment, my eyes got big. It was awesome to have the money to start the program and award to people.

Now, I'm on the hook for running a postdoctoral fellowship program. Had I ever done that? No. Have I ever run a program like that? No. Despite all the logistical challenges, this program has been immensely successful. We've had 24 funded postdocs who have gone on to receive other awards, so the Matthew Effect is definitely in effect.

Whenever you give somebody money, you do it for a specific purpose – you want that thing to grow. There's also idea that you’re investing money because you want to see a good return on investment. I think for this particular program, we've been very fortunate in having both.

To be able to have my vision materialize with the support of the BIO5 has been great. It really means a lot to me to be able to see things like that through and really help those postdocs on the back end.

The BIO5 Postdoctoral Fellowship is not your only brainchild. Last summer, you initiated a microbial matchmaking program – the National Summer Undergraduate Research Project (NSURP). Tell us more about this program and where the idea came from.

Undoubtedly COVID stopped a lot of things, and one of the things that they put a stop to were summer research programs. A lot of undergraduates use those summer research programs as the basis for applying to graduate school or getting the training that provides a steppingstone to get into a STEM field. I had a summer student who was supposed to come here, and I was very excited to have her, but because of COVID, she couldn’t come. That was the initial spark for the program.

The other thing that was happening was that there were a lot of racial tensions in the U.S. last spring. It has a way of eating at you in a very negative manner. There's confusion, there's fear, there's anger. There's a lot of emotions that just run through all the things that you see on the news. Those things start to take over some of the space in your brain for doing science or doing other things until you find some kind of outlet to release that energy, or at least change that negative energy into something positive.

On June 2 of last year, I thought it would be cool if we could have some kind of matchmaking thing for people who are missing out on opportunities. I spoke with Dr. Jennifer Gardy at the Bill & Melinda Gates Foundation and said, “I have this really crazy idea that I want to run by you. What if we could match people together do research virtually?” And she's just like, “That sounds awesome.”

I then talked to Dr. David Baltrus, and two days later, we had our first meeting; five days later, I bought the website and we had it populated. So by June 14, we went live with our application portal and said, “We want buy-in from your community. If you're saying that you're an ally, then help this population of students get research opportunities.”

We had the application portal open for five days, matched over the weekend, and then started the program the following Monday. I originally thought we’d have only 20 people, so that seemed doable,  but the first day, we had about 50 applications, and the second day we had 50 more applications. And by the end of that week, we had somewhere around 250 applications and 100 mentor signups. That was insane.

For our first cohort, we were initially targeting BIPOCs, but we had so many applications that we opened it up to the Latinx community, as well. In the middle of the summer, we had another cohort come in, so we had a total of 250 underrepresented minority undergraduates, all doing virtual research with a total of 180 mentors. Some of the students did presentations, and we were able to give $100 awards for the top 15 presentations. We had an essay contest, we gave away microscopes, and we got people membership to ASM.

I thought this was great. And then people started asking, “Are you going to do it again?” I said, “You realize that we did this whole thing on a budget of $3,000 from community and personal donations?!”

I was going up for tenure, so I just didn’t think I’d have the time, but it was one of those things where for the amount of people that we help, you have to make time. We started to secure funding from RII and the Provost’s office, and then the NSF came through with a rapid award for about 200 grants to pay the students for eight weeks of full-time work. We also added computational immunology as a discipline so that we could grow.

Even though we might be going back in-person, the mission of this program is to stay virtual. When we started this, it was to help people who missed out on programs. When we did a survey after the first year, we found out 33% of the people in the program would not have been able to travel in the first place. An additional 25% were unsure, so when everything goes back to normal, they're still going to be left out. Our mission is to stay virtual and help those particular students so that they can achieve their dream on a career in STEM.

You’re quite active on social media. Do you have any advice for how to communicate effectively over platforms like Twitter?

I tell people feel free to be you, but know that when I look up somebody, I look at everything I can find about them. If they have a social media presence, and their social media presence is good, that's a point for them. But if I find that they're talking trash about everybody, then maybe that's not a good thing.

Also know that there's no need to repeat something that has been said or beaten to death by so many other people. If you’re posting, make sure that you're positively adding to the conversation. If you're going to shed light on something, then shed light, give some information about it so that people can make informed decisions.

Citing sources is important, especially being a scientist.

You also have to choose your battles, and sometimes that means turning social media off so that you don't continuously doom scroll. Sometimes you need to take a break and that's absolutely positively fine.