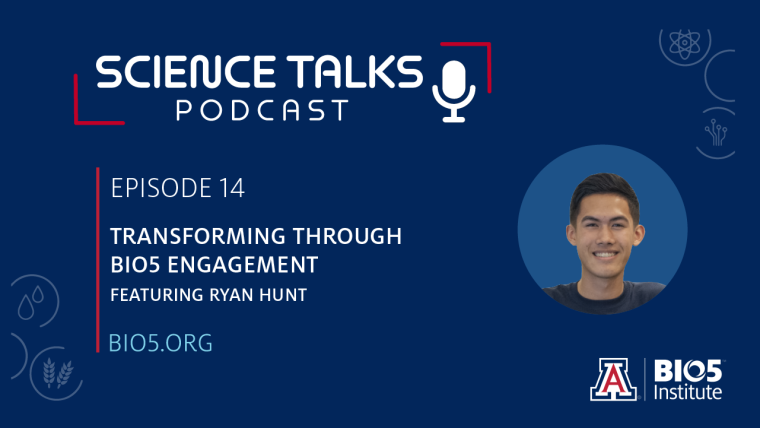 By engaging students in hands-on experiential learning and providing them with a world-class education, these budding young minds can blossom into productive members of the STEM workforce. Ryan Hunt has taken advantage of several opportunities provided by the BIO5 Institute, including the KEYS high school internship program, undergraduate research, and a student job with the public affairs team. Hunt shares how each role within BIO5 has impacted him both personally and professionally. He also talks about his love for art and science, and how the two can be combined to communicate science with researchers and the public alike.

BU: Tell us about your experience with the KEYS program as an intern in 2018. How did it fuel your scientific passions?

I definitely came to the program really wanting to target my interest in science. At the time in high school, I was taking biomedical and environmental science courses, and I really wasn't sure which path I wanted to take. During my KEYS interview, I expressed my interests in both of those areas and my interest in working at Biosphere 2. I guess that's how I got placed into the Meredith lab.

Going into the Meredith lab, I was expecting to work at Biosphere 2 in the rainforest, but I ended up working in Dr. Meredith's backyard working with dirt, but it was a really valuable experience. I ended up falling in love with soil science. In her backyard, she implemented various green infrastructure techniques, and we were studying the soil to see how the green infrastructure influenced different ecosystem services within the soil.

From that point on, while I was doing field work and lab work, I basically fell in love with independent research. I found it very meditative because I think that summer I went through over a thousand soil samples, just repetitive back and forth, but it was definitely had a meditative aspect. You get in the zone.

I’ve continued in the lab since attending the University of Arizona, and during either the first or second semester at the university, I got placed into the ecology of rainwater harvesting project, which was really tied into green infrastructure. Again, it was with the Meredith lab, and it was a collaboration between architecture and soil science students. We were redesigning an area of campus to make it more environmentally friendly, and we chose the crutch garden on the mall. It was really interesting to see how the two fields blended together, especially because it involved architecture, and I love art.

I finally ended up going to Biosphere 2 and getting to work on the B2 WALD project, which was a whole-ecosystem drought experiment. I did a bit of sampling there and a bit of allocation and processing of the samples in the lab. Then the pandemic hit and I had to take a break, but I’ll be back in the lab this summer. We’re going to Alaska to study the carbon cycle.

BU: Why specifically are you going to Alaska?

We're going to be going to Alaska because that area, specifically for the research that we're doing, hasn't really been characterized completely.

We’re studying the carbon cycle in a newer way by studying carbonyl sulfide, or OCS, which has implications in the photosynthetic cycle where it's also taken up by plants. It's basically a tracer for photosynthesis instead of studying carbon dioxide, so it’s a new method for understanding how carbon is cycled between the atmosphere and plants and the soil.

When I started with BIO5, I was more into writing and communication. My first major project was interviewing Ricky Cordova and working on that story. That was a really valuable experience because he really taught me a lot – he’s a big inspiration for me.

I also really got into graphic design. I had basic knowledge in Adobe InDesign or Adobe illustrator, and with BIO5, I was able to really build upon that knowledge. I feel like over the years, I've definitely improved a lot.

I definitely feel that art and graphic design are ways to make science communication more engaging and accessible. It can really like supplement written words, especially through promotional materials of stories. I feel like it can really get people interested in science. It's really effective in showcasing the combination of the written work with visuals like pictures, and it just allows for the audience to have a more personal connection with the science too. It opens a lot of doors.
Going from high school to university, I was really trying to incorporate art within science. I was actually considering becoming a science illustrator where you use illustrations to make graphical interpretations of the science. I feel like it's definitely very important. A lot of these processes could be almost impossible to learn without visual interpretations.

It just brings you into a new world. It really puts you in the science, which I think is incredible.