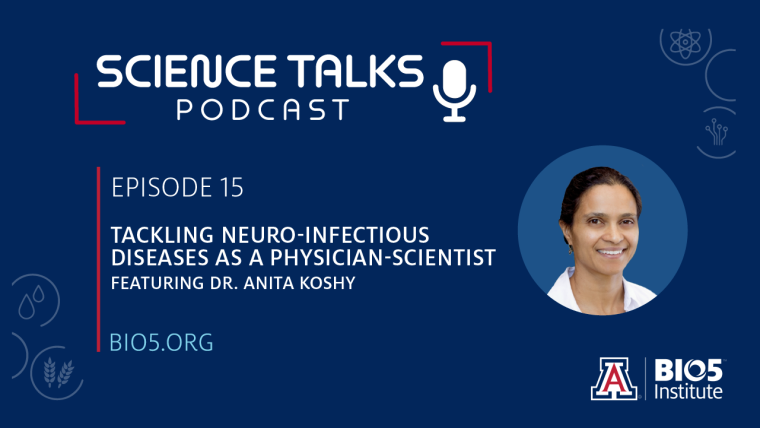 Dr. Anita Koshy discusses her path to becoming a physician-scientist and how her time spent at the bench and bedside complement one another.
Dr. Brittany Uhlorn, BIO5 Institute

Ever wonder why pregnant people shouldn’t scoop kitty litter? They might come into contact with Toxoplasma gondii, a parasite that infects up to one-eighth of the world’s population that can cause lifelong infection in the central nervous system. Dr. Anita Koshy, associate professor of neurology and immunobiology and BIO5 member, talks about her research to better understand this pesky parasite. She also shares her journey to becoming a physician-scientist, and how she spends her time away from the clinic and lab.

You study Toxoplasma gondii, a parasite that infects up to one eighth of the world's population. Tell us a bit about this parasite - what it is, how we might become infected with it, and how it causes disease.

Like a human, Toxoplasma gondii is a eukaryote, so it has a nucleus where it stores all its genetic material, but unlike a human, it’s a single-celled parasite.

You get usually infected with Toxoplasma from eating or drinking contaminated food or water. Cats are the only definitive host, so when a cat gets infected, the parasite can undergo sexual recombination. A cat will then poop out a specific form of Toxoplasma, and if that ends up in your water, you can get infected.

Others get infected from the kitty litter - if you're cleaning out your kitten’s litter, and you get your hands dirty and don't wash them, then that's another way that you can get infected, which is why pregnant women aren't supposed to change kitty litter.

The parasite goes all over the body, but it is typically cleared out except for a couple organs, including the muscle and the brain. In the muscle, the parasite can cause persistent infection, especially in pigs or chickens. If you don't cook your meat all the way, you can ingest one and get infected that way.

What led you to the dual career path of both conducting research and seeing patients in the hospital?

Both of my parents are physicians, but neither of them pushed me toward being a physician. I went to college thinking that the world does not need another Indian physician, but I also grew up at that time with the idea that as an Indian, you could be a physician or an engineer.

I decided I didn’t want to be a physician but quickly discovered that I didn't like the classes in engineering. I took some biology classes and really enjoyed that, and ultimately, I became a physician because I understood their job. I don't think I understood what a Ph.D. was or that you could go that route.

I worked in a neuroscience lab that was run by an MD/Ph.D., and I loved that lab. That experience really made me think about doing a career in science. I then went to Duke, which is a unique place in that you spend a year as part of medical school doing research. That was great for me because I hadn't done enough research to have any idea if that's what I wanted to do, so that year really solidified that this is what I wanted to do.

How has your research training benefitted the way you treat patients, and how do you share that wisdom with your trainees?

Being a physician is different than being a scientist in that being a physician is all about pattern recognition. You have to have a relatively good sense of pattern recognition because otherwise it take you forever - you can't spend three hours on every patient and present 900 options for their diagnosis and treatment plan. Being a scientist is about seeing patterns in different organisms or a different context and asking how they fit and connect. But it’s also much more about discovery.

I try to help residents and medical students think about what that data means. Right. For example, if I tell you this vaccine is “X” percent effective, well, what does that mean? How did they figure that out? What does that mean for our population?

You're imparting a lot of information on the students and the residents you interact with, but what are some of the things that they have taught you?

I love including them in the conversation and asking, “What do we think we should do next?” and hearing them come up with ideas that I wouldn't have ever thought of. From that standpoint, they're constantly teaching me science and lead me to read more.

It’s important to cultivate an environment that allows them to ask questions, be a part of the answer, and inspire me to keep learning.

You’re known for your “Donut Tuesdays” that help to create a community not only within your lab, but within the Keating Building as a whole. Why is creating a community within research so important?

We're all going to work really hard, so given that, we should try to have fun because that makes it infinitely more pleasant. I've been fortunate to have incredible mentors and worked in incredible labs, so I want to replicate that as much as I can.

In terms of the openness of science, it is so important for us to get feedback from other people – both an insider’s and an outsider's perspective. They will see something differently and really make you reassess what you’re doing, so it's important to help your science.

At BIO5, we're celebrating 20 years of helping researchers get to where they want to go. Talk about your experience with BIO5 over the years.

I don't think I would have come here without BIO5.

One of the former directors (Dr. Fernando Martinez) was an MD who did science and had a key insight that physician-scientists get pulled in multiple directions. If you don't help them and make sure they are sticking close to their science, then it becomes very easy for them to end up primarily being clinicians, and that's for two reasons.

First, when I go into the hospital, and I order a test, it gets done quickly. When you do something in the lab, it may not work right. When I worked for months on a grant and then it got trashed or doesn't get funded, you don't know what's going to happen. With that frustration, it becomes easier to just go in and see patients. The flip side of that is for department, because when I'm in the hospital, seeing patients is guaranteed money, but again, if I submit a grant, I may or may not get that. There's this push for physicians to be in the hospital or in a clinic because it satisfies the financial need.

Fernando realized that if you can separate those two issues, then you have a better chance of success.

The second thing that BIO5 did is it allowed me to have a science home and a clinical home. My clinical home is neurology, and my science home is immunobiology, and that in and of itself is a super unique opportunity. It would have been hard for me to be successful just being in neurology because I wouldn't have had people who could read my grants and understand the basic science

It'll be 14 years in October, so it has been a great journey. I wouldn't want to be elsewhere. I feel very lucky to have ended up in BIO5.