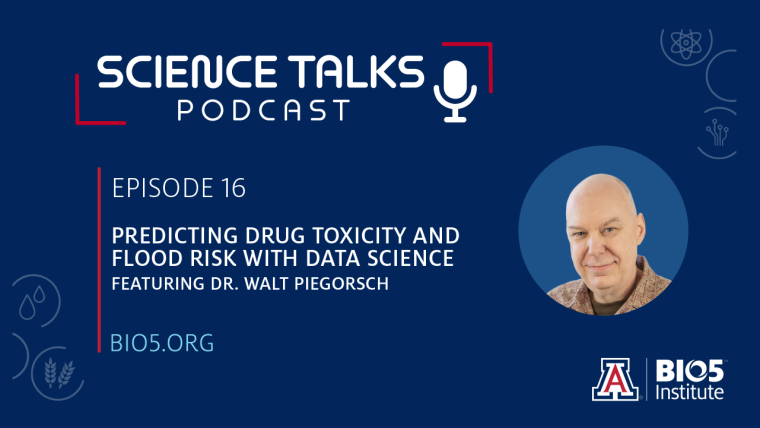 Some of the biggest challenges in STEM are so large that they can’t be addressed at the lab bench. Dr. Walter Piegorsch, director of statistical research & education at the BIO5 Institute and professor of mathematics and public health shares how he uses the power of data science and informatics for environmental and health risk assessment.

BU: Much of your research focuses on refining benchmark risk assessment methods, which have traditionally been used to determine the toxic dose of a drug or chemical. Tell us a little bit more about this method and how your research is advancing its utility.

It's now become a fairly standard technology in risk assessment. Imagine that you've got some sort of adverse outcome and it can be anything - I'll go back to the original example way back in the eighties, when this was developed. Say a laboratory animal that might get cancer, and there's some risks, up and down, on whether or not that animal gets cancer. If you've also got some metrics, say the dose of a carcinogen that you can connect to that risk, you can ask how much of that dose is acceptable to the animal before its risk becomes unacceptable. Those go up, risk goes up.

You might even imagine there's data statisticians like me who will go in and fit a curve to those data. If we go above the curve, it's adverse, it's too high, but below it it's acceptable. Now I say acceptable, not safe because it's still a carcinogen. We make trade-offs all the time on risk and benefit. It's just nature of our society.

One of the goals of this particular methodology is to find numbers that a risk manager can go and use determine acceptable limits for hazards.

SC: You’ve applied this not just to drugs, but to flood risk. So, when you think about urban vulnerability, you think about the possibilities of something flooding, like during the monsoon season. We look forward to all the things that come with actual rain in the desert, and yet that does probably make us vulnerable, especially when we have dry season after dry season and then massive flooding. Can you talk about how your data sets can help us predict when certain things are going to happen and how vulnerable certain areas are?

We did that study on a city level, upper or metropolitan level of scale. The study was with 132 of the largest cities in the United States. We built what we call the place vulnerability metric, which has essentially three components. There's a social component, a built environment component, and our physical hazard vulnerability.

The top of the list is New Orleans. Tucson's actually in the low category, I'm very happy to report.

BU: So say unlike Tucson, you predict a specific place has a high hazard ratio. How would you like to see that kind of information then impact the infrastructure or the people in that area to better prepare for a potential hazard or natural disaster?

There's always a story behind those numbers - actually try to elucidate what that story is behind the number. In fact, if you don't know it, go find out what it is. New Orleans is a high vulnerability city because it's got high flooding concerns, it's got built environment concerns, and it's got social concerns. These metrics make up the bigger picture.

What would we like to see policymakers do with these? Take a look at their cities and ask, “In the event of emergency, are they able to get four lanes going out? Are they communicating properly with their antennas and devices they use to communicate? Are the first responders able to get into a big area that's been hit badly?”

Those questions are about the built environment - something we can affect. If our built environment score is high for a city, that means they've got some problems, so policymakers need to find out what they are. Then we need to be talking about these things in Congress and the White House. It’s long overdue.

We need to be prepared. If we ignore these three variables, we are looking at a much bigger disaster than if we had answered some of these questions prior to, so the data kind of feeds into the idea that we’re trying to be preventative as opposed to reactive, because at the point you’re being reactionary, the damage is going to be a lot worse.

SC: Where did you find the inspiration to take this traditional method for looking at drug toxicity and apply it to everything from terrorist attacks to floods?

It was a light bulb moment.

I was working with this geographer. We were sitting in a conference room, and there was a grant I was a co-PI on where there were 132 cities that we were studying. We were trying to understand things, and visualization is part of the key for us. So much of what geographers do can be visualized with maps.

Before I thought of this risk assessment idea, and I was looking at these visualizations, and I thought that city is like a laboratory mouse strain. And the carcinogen is vulnerability metric. And that's the kind of beauty of many of these statistical methods that there's a translational nature. That's embedded in what those methods can do. Once you recognize that feature in the translational nature of the statistical method, you can start doing all these different things.

SC: Your work sounds quite interdisciplinary in nature. Talk about your experience with BIO5 and what it's meant to you.

I could not do this research alone. I could kind of fit these ideas up, but then I have to ask somewhere, “What’s the vulnerability in a city?” and I need a geographer, or I need a social scientist to tell me that. And by the way, I'm still writing papers with my grad students on just the cancer biology stuff too. In fact, Brittany, you and I were talking about that a few weeks ago. One of my grad students here in BIO5 won a national student paper award on all this risk stuff, but it was in that laboratory animals about cancer.

I can't do the research alone. I have to do it with researchers - with collaborators – and BIO5 is one of the hotbeds on this campus where we collaborate. It’s just fundamental to the nature of what we do, and it's been true for the 15 years I've been here.

BU: What does the future hold for you in terms of your career and research? What's next?

I have two kinds of arms in my research. One is this precision medicine stuff that our bioinformatics people do. The other is risk assessment, which has been with me for a long time. I started working on this back in the mid-nineties and it's still generating questions. It's still generating interesting papers that are publishable, even student awards. We're looking at going back to this asthma data, as I said, I mentioned that one's going to be tough, but I think we can at least look at it. We're going to keep working on just this kind of standard, sort of a task ecological assessment in laboratory animals. As I said, there's a paper extending these ideas of urban vulnerability.

We can also always go back and update our data on floods and terrorist attacks. I'm always looking at the environmental ideas, which is that's where I come from and that's from going to keep going. That's what started me on this, and that's what continues to get me up in the morning and want to keep doing this.