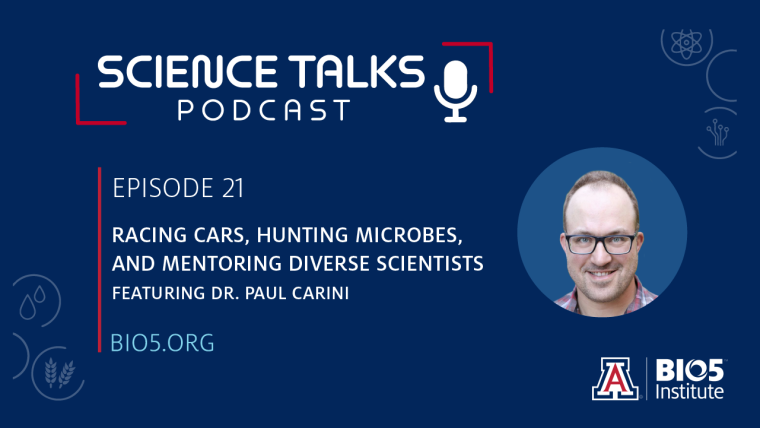 Microscopic organisms were the earliest forms of life on earth. To this day, it's estimated there more than 1 trillion species of microbes that inhabit our soil, water and air.

Self-proclaimed at microbe hunter Dr. Paul Carini, assistant professor of soil/subsurface microbial ecology, genetics and plant sciences, talks with Dr. Brittany Uhlorn about his path to microbiology, the importance of microbes, and how he supports diversity in STEM.

How did you wind up in science?

I've always had an urge and desire to do science. I have a Dr. Seuss book from when I was six, and there's a page that says, “When I grow up, I want to be…” and I had written in Crayon, “scientist.” I also have a photo that my mom still cherishes of me holding a junior microscope as a seven-year-old.

We grew up next to a field that was next to a tavern, and the patrons of the tavern would eat chicken wings. The bones would make their way into this field and be buried, so I would dig them up with my little shovel because I’d think they were dinosaur bones.

I’m a first-generation college student, so I didn't really understand what a master's degree was but needed one to pursue physical therapy, so I picked microbiology as my undergraduate major. In a class called cellular evolution, I thought, “Oh, I could do microbiology forever.”

My mind exploded in that class with all these cool ideas, and all this stuff that was unknown about how microbes evolve, how they survive hostile environments, the origins of life, and the origins of eukaryotic cells that we are made of.

At that moment I decided to pursue microbiology.

Your lab is interested in deciphering how microbes make earth habitable for humans. Tell us a bit more about your research and how these microorganisms are important to supporting our lives.

If we start with our bodies, microbes are on and in us, and most of them help keep us healthy. Some also cause disease, but that's a very small portion of them.

If we go outside of our body, there are microbes all over our environment, like in our bathrooms and in the air we breathe. Those microbes usually come from the soil where they're released as part of their natural ecology. In two tablespoons of soil, there is many microbes as people on earth, and there's as many species of microbes in that two tablespoons of soil as there are bird species on earth. These are tremendously diverse living ecosystems that affect plant productivity and maintain crop and soil fertility.

They are rich sources of antibiotics and other therapeutic agents - there's a compound called rapamycin that has been linked to longevity that's produced by a soil microbe. And, of course, they balance these critical nutrient cycles, the most important one being the carbon cycle.

If we get in a boat out into the open ocean, and you take a deep breath, about half of the oxygen from that breath comes from phytoplankton in the open ocean. The rest of the microbes in the ocean helps support that system by recycling other nutrients that those oxygen producing microbes need in order to grow.

We dabble a little bit and all those things - we're working on a project right now trying to understand how gut microbes may mitigate arsenic toxicity. There's a lot of arsenic exposure resulting from mining in Arizona, and some of that arsenic gets ingested by the populations that live near these mines. We would like to understand if the microbes in the gut are influencing the toxicity of that arsenic to the host.

Let’s talk a bit more about the makeup of your lab – you’re interested in training diverse scientists. Why is it important to you to support diversity, and how do you achieve diversity in STEM?

STEM research has traditionally focused on issues that were deemed important by the people that were doing the research. Historically, and even today, that's enriched in white men and largely excludes the issues that are important to other groups like Indigenous populations and Black or Hispanic groups.

It's critical to train those diverse scientists so they can be in those decision-making processes that impact the communities that they live in and affect change on as many groups as possible.

The only way to do that is to train those individuals and to be welcoming and supportive in the ways that they need to be welcomed and supported, which are going to be different than other populations.

We've tried to put in systems that promote diversity in our lab group, starting from the moment we decide to hire someone and going all the way through when we when they leave the lab. Our systems are meant to minimize unconscious bias in the review and evaluation stages of hiring someone, acknowledging that there are different ways to be successful, and then creating structure around trying to identify those different ways and promoting them.

Everyone comes in with different perspectives and life experiences, and you try to meet them where they're at and work together to have them grow and reach higher heights of what they're potentially capable. We want them to give their best and shine their light on the research projects that they do with us, and hopefully leave in a better place than they were when they started.

It could get easy as a scientist, especially for someone who's running a lab and mentoring, to get trapped in their work. Talk to us about work-life balance.

That was largely learned it during the pandemic…I think that was a real big struggle, not just for me, but for everybody, the last year and a half.

I realized that if I’m not starting to take care of myself, I’m not going to make it very far. I really had to put that energy on making sure that I was well, so I could provide for my lab group, for the research, for the university, and for my family.

I’ve not always had a great work life balance, but over the last year and a half there's been a pretty good change and I don't think I could go back to the way I was doing things before.

LAND ACKNOWLEDGEMENT We respectfully acknowledge the University of Arizona is on the land and territories of Indigenous peoples. Today, Arizona is home to 22 federally recognized tribes, with Tucson being home to the O’odham and the Yaqui. Committed to diversity and inclusion, the University strives to build sustainable relationships with sovereign Native Nations and Indigenous communities through education offerings, partnerships, and community service.