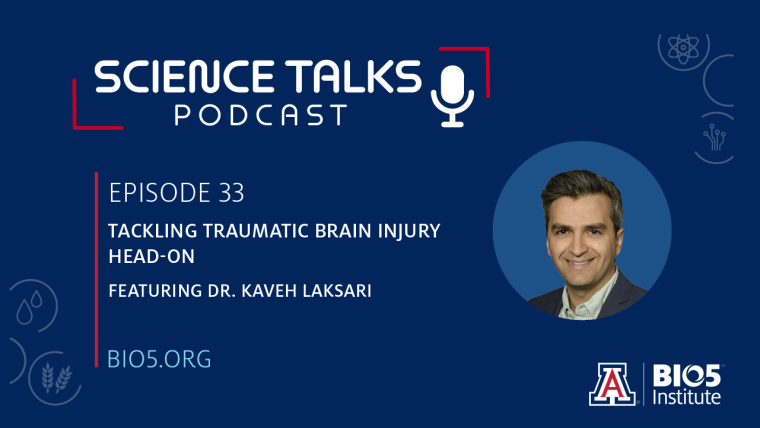 Traumatic brain injury (TBI) is the leading cause of death and disability for individuals under age 44 with an estimated 1.7 million cases occurring in the U.S. every year, and concussion is dubbed a silent epidemic. TBI dismantles circuits in the brain, leading to short and long-term cognitive dysfunction. Dr. Kaveh Laksari utilizes biomechanics to study the underlying processes of TBI and model the injury to aid in prevention and accurate diagnosis. Dr. Laksari is an assistant professor of biomedical engineering, aerospace-mechanical engineering, and neuroscience, as well as a BIO5 member.

LR: Walk us through what happens with a traumatic brain injury - what are some of the common causes, and what happens to the brain?

It's a pretty serious problem that faces our society today. Obviously, there's a lot of talk that we hear about sports and military service members, but if you actually look at the numbers, the majority of TBIs are seen in kids riding bikes or older folks with ground level falls.

There are different causes for traumatic brain injury, but I think that the most common is what we call blunt injury to the head - an object hits the head right, and in the more severe cases there is an actual insult to the skull (fracture and local bruising of the brain). In the majority of cases, we have more milder types of TBI (mTBI) which are mostly due to an impact or a motion that doesn't really do much damage to the skull but nonetheless causes injury in the brain.

How does that happen? We have this theory that a massive blob of soft matter, if you will, called the brain inside this stiff, bony structure known as the skull. Sudden movement of the skull would lead to transfer of energy from the external forces to the brain inside, even without contact. This causes the brain to move around and wobble, and because of hitting the inner side of the skull, or due to excessive stretching or shearing of certain parts of the brain, that causes the microstructure of the brain to get damaged.

ARB: What part of the brain is more vulnerable, and why?

In the past with more severe types of injury, like in car accidents before we had all the safety measurements, a lot of the injuries happened to the surface of the brain. Nowadays, there's a lot of injuries that we see that are deeper inside the brain. One particular region that is reported a lot, and one that we see in our research, is called the corpus callosum, which is the bridge that connects the two hemispheres of the brain.

It has to do with that particular shape and geometry of the brain, and also the boundary conditions of the skull - it has membranes that are a lot stiffer than the brain but softer than the skull. There’s one right in the middle of the brain that separates the two hemispheres at the base of the brain, and depending on where it’s hit or experiences extensive stretching, that could cause damage. As it happens, that membrane is right on top of the corpus callosum, so in our research, it’s an important area to study.

LR: You've developed some tools like a specialized mouthpiece with a microprocessor that delivers data related to the movement of an athlete. Can you describe the focus on creating tools that examine that movement under a helmet or in a mouthpiece that help you gather this kind of data?

This will be a continuation of the work that I was doing as a postdoc at Stanford University. The idea is that a lot of the information that we need as engineers to understand what sort of forces are excessive or cause injury, or how to prevent these from happening with protective equipment, has to do with knowing what sort of forces we are measuring.

It can be very difficult, especially if you're thinking about doing this on the field. In the lab, there are sensors and measures that we can do, but on the field, what's out there? The next best thing is to measure the external force that is applied to the brain and its effect on the head right. We call this kinematics: how fast or slow, in what direction, for how long, and so on, does the brain move as a result of that impact right?

A lot of these athletes wear a mouth guard. I think that's prime real estate for sensors, and with the advances that we have now in sensor technology, we have really tiny sensors which pretty much all of us have in our smartphones these days that we now put in a mouth guard. We're able to measure their head’s kinematic motion wirelessly as they're going about their game, and then download data after the game.

That’s one thing that has moved the field forward - now we have some measures of what actually happens to the head as a result of all these impacts. We've been collecting data from American football players with the helmets, and also with women’s soccer, which is an area that’s really understudied. We can also do this with contact-oriented sports like mixed martial arts.

We have a lot of the data from different sports in terms of, “Okay, there is an impact, so what is the result of that? How does the head of this person respond to that impact?” from which point, we can do a lot of modeling. As an engineer, we can model the brain and the skull and the head as a system. We know the input to this model which is how the head moves back and forth. We can then estimate how the brain is affected.

We go one step further and ask how the brain is affected on a cellular level.

LR: Taking a step back, can you talk about your journey to this novel career path, and how you found yourself at the intersection of engineering, biology and medicine?

These days, thankfully, there's a lot more collaboration across fields with the application to health.

I had been trained as a mechanical engineer in my undergraduate. In graduate school, I actually go to learn about applications to human health. In my lab, we still do a lot of stuff that a mechanical engineer does - we do a lot of simulation, and we build a lot of stuff – but the application of it is has taken a turn in the sense that if it works, hopefully, we will be able to prevent someone from having a concussion or help them diagnose it faster than the techniques that are available today.

Ultimately, that would help someone have a more productive life in the future, and I think that gets me and a lot of the students that I have in the lab going - it's the aspect of application of this to human health and being able to help someone.

ARB: How does collaboration benefit your work?

Our work is nothing without collaboration.

For our lab, when we talk about application to human health, that's exactly where we don't necessarily have the expertise. So that’s where we have wonderful people who work on the other, more important end of the spectrum, who are more into medicine and clinical science.

I think this is the most difficult part for me as well – to learn the language and go from things like kinematics and acceleration to brain imaging and brain cells that are injured. It makes this work more interesting for me, and a lot more important in terms of human health.

We’re lucky within an institute like BIO5 where we have great collaborators and a forum for all us to be together and talk, especially with the med school so close.

ARB: We like to think of our scientists as superheroes, so if you were a superhero, what would your superpower be?

My character would definitely have a helmet!

My power would probably be to help prevent an injury like this in sports and even with kids riding bikes and whatnot. I think that's really important.

About the University of Arizona BIO5 Institute

The BIO5 Institute at the University of Arizona connects and mobilizes top researchers in agriculture, engineering, medicine, pharmacy, data and computational science, and basic science to find creative solutions to humanity’s most pressing health and environmental challenges. Since 2001, this interdisciplinary approach has been an international model of how to conduct collaborative research, and has resulted in disease prevention strategies, innovative diagnostics and devices, promising new therapies, and improved food sustainability. Learn more at BIO5.ORG.

About the Technology and Research Initiative Fund (TRIF)

The Technology and Research Initiative Fund (TRIF) that helped launch BIO5 in 2001 continues to be a catalyst in enabling effective, cross-disciplinary bioscience research and innovation at the University of Arizona, where initiatives and projects are carefully chosen to align with areas of state and national need. Since 2001, over $50M has been invested in building critical facilities and research services that UArizona is leveraging today to respond to the world’s greatest scientific challenges. TRIF resources are also instrumental in funding events and programming that promotes STEM education, outreach, and training.