Episode 7: The importance of storytelling and collaboration 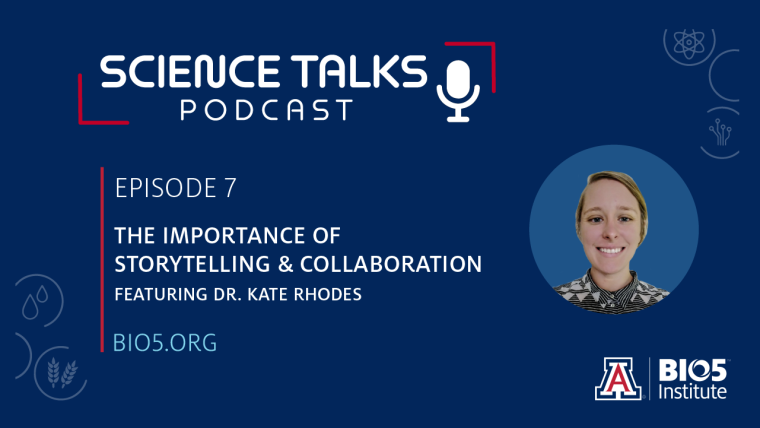 Dr. Kate Rhodes relies on collaboration to conduct her research on gonorrhea and uses storytelling to communicate her findings with the public.
Dr. Brittany Uhlorn, BIO5 Institute

Today’s biggest scientific questions cannot be conducted "in a vacuum.” Dr. Kate Rhodes, a postdoctoral fellow in the laboratory of Dr. Maggie So’s lab, shares how the BIO5 Institute fosters the cross-disciplinary work that is necessary to solve these problems. She also talks about her research on a bacterial strain that causes gonorrhea, a highly prevalent sexually transmitted infection. Dr. Rhodes, a two-time recipient of the BIO5 Postdoctoral Fellowship, discusses how she employs storytelling through grant writing and public communications.

It can be incredibly difficult, both as a new and seasoned investigator, to secure funding. You’ve been awarded the BIO5 Postdoctoral Fellowship twice, so what are your keys to success in writing a funded proposal?

The first key to success for me has been having a fantastic mentor. Maggie (So) knows the ropes, and she is really devoted to making sure that her trainees get an inside look into how to navigate the funding process. She's been an absolutely invaluable resource from that angle because she's basically downloading all of her years of knowledge directly into my brain. She's been able to convey to me to figure out how to tell a compelling story, and to simplify things to a goal that you can easily attain in the amount of time that you have.

That's a problem that a lot of scientists have – they have an exciting idea and see all of the different directions that they can go in. If you spend all of your time chasing every single rabbit down every single hole, you're going to have a hard time reaching something that's publishable or something that can move the progress of your research program forward. It’s been key to figure out how I can narrow things down and turn it into something I can reach in a reasonable amount of time.

The first set of funding was based on a collaboration with a researcher who has developed a pioneering technique for looking at microbial communities using advanced microscopy methods. We were using that to evaluate the behavior or the community structure of our model organism – Neisseria gonorrhoeae - in the context of the gut microbiota.

This ties into what I’m going to be working on with the new project, where we are coming up with new ways of examining bacterial behavior and how they interact with the organisms that are in their immediate environment. It's a different way of looking at a similar problem. In that first in the first project, everything was done on tissues that have been generated from our mouse model that had been colonized with Neisseria to act as a surrogate for asymptomatic infection. We noticed some interesting behavioral phenotypes in these bacteria, so we wanted to know how this bug was interacting with the gut environment. The new project is taking some of those ideas a step further but instead of looking at an animal surrogate through microscopy, trying to figure out how Neisseria gonorrhoeae interacts with the organisms of the female reproductive tract. It's one step closer to what would be happening in an actual human body.

You use a special microscopy technique to do your research – can you tell us what it is and what it allows you to do?

The method is called Fluorescence in Situ Hybridization, or FISH. With this technique, we're using an advanced microscope that can detect a lot of different wavelengths of light to visualize what's happening directly on the mucosal surface of a tissue sample. We use a bunch of different probes - pieces of DNA - that are specific to those organisms. When we look at that through a microscope, we're basically magnifying everything by hundreds of thousands of times, and that lets us figure out in the context of the entire tissue, who's a member of this community. What are our specific bacteria doing? Where are they located? Are they forming their own communities? Are they mixing with these other bugs?

Can you tell us about the special balance between good and bad bacteria that occurs in our microbiome, especially in the female reproductive tract?

I think the idea of everything being either good or bad is kind of an oversimplification. When you say good or bad, it gets rid of the context. There are so many internal and external influences can have an impact on your final outcome. It's kind of a shift in the field to think of it as instead of good and bad bugs, to think of it as bacteria with different ranges of pathogenic potential.

Whether or not you get sick may depend on the bacteria that you come into contact with, but it also depends on who else is in the neighborhood. It depends on your genetics. It depends on your immune status. It depends on a whole host of other factors. You could have two completely different outcomes in two different people from an interaction with the same species of bacteria, which I think is absolutely fascinating.

How did you find you way on this path in science?

I grew up on a ranch, and I was always really interested in what the vet was doing, especially when we had sick animals. That was my first foray into thinking about infectious diseases. I just kept following that interest, and through all my training, the one thing that's really stood out to me as the most interesting is understanding how these bugs can shape their environments. My Ph.D. work was in anti-microbial resistance. It's evolved from there into what I'm working on now. I can continue to ask questions like, “How does this bug cause disease in the context of what's actually going on in the environment?” The fact that there are so many different things going on is something that I think is absolutely fascinating because it all ties together.

What are your next steps in your research with this fellowship?

Next I will start working with our collaborator Dr. Melissa Herbst-Kralovetz at UA Med Phoenix. She and her team have developed this awesome system that enables them to evaluate the development of bacterial vaginosis in vitro. The next aim for me is to go to her lab, learn how they perform their research and are able to culture some of these really difficult to culture microbes from clinical samples. Once I learn the ropes from her, I’ll start running my own experiments.

Your research revolves around a sexually transmitted bacteria, which carries a lot of stigma. How do you approach communicating your science to the community?

You're absolutely right. There is still a stigma associated with talking about sex and especially sexually transmitted infection, but there’s not necessarily a stigma about talking about women's reproductive health. The key is to just make things as nonjudgmental as possible, because you want people to be able to talk about their own experiences or to be willing to come forward and seek treatment. You have to make the information unambiguous and approachable by making it something that anybody can understand.

That's definitely something that I am still figuring out, too. As a scientist, you get homed in on this one thing that you think is really cool, and you may have all of the background information that's necessary to have it make sense, but you have to figure out how to translate that and give all of the necessary facts to somebody who doesn't have your background. A major goal for our field, on every aspect of the findings that we have, is to translate them into simple terms that anybody can talk about and feel comfortable talking about.

Talk about your experience with BIO5.

The coolest thing about the Institute for me is the fact that there are so many different kinds of research going on under one umbrella. Especially with the kind of stuff that I've been doing lately, I've had to expand my tool set. If you're working in a vacuum and trying to do something new, you may not have access to somebody who's been doing it for 20 years and knows the tricks of the trade to make your life easier.

That's why the setup that we have here is perfect for the kinds of research that we're going to need to develop moving forward where we're pulling in expertise from all of these different disciplines. The best way to answer a question is to come at it from a bunch of different angles, and that's basically what happens here on a daily basis.