Episode 8: Personalizing treatments with the power of computers 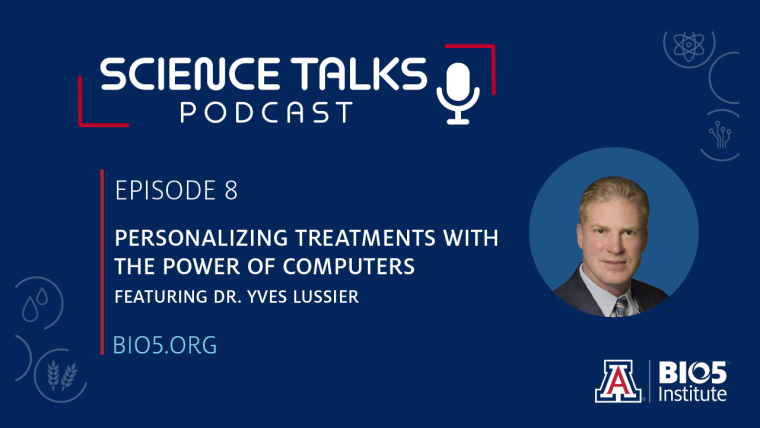 In the era of precision medicine, scientists and physicians are constantly looking for ways to innovate and personalize disease treatment. Dr. Yves Lussier, former BIO5 Associate Director and Associate Vice President and Chief Knowledge Officer at UArizona Health Sciences, discusses how technology and a bioinformatics approach can help us better understand diseases like COVID-19 and tailor treatments to each individual.

You’re a physician-scientist – how do those two disciplines work together to tackle health problems like COVID-19?

It’s a process of making sure that we can do better, faster decision making in presence of patients. These decision support tools generally require lots of technology and knowledge about medicine in order to perform well, alerting us at the right moment and not missing anything important. In addition, now that there's more knowledge - genomic knowledge - about medicine, that enables us to do this precision approach, which is really individualizing healthcare for these diseases.

Can you tell us a bit more about precision medicine?

Nurses and physicians have always tried to individualize healthcare. Now we’re drinking knowledge from the firewalls. In 2001, the human genome project led to the full sequence of the human genome, which is 2.5 billion base pairs, or 2,500 millions. One needs to understand how that relates to our health and disease, and how it interacts with the environment. Otherwise, we'd look exactly the same as we were when we were born.

The genome is a blueprint for designing us, and for how we designing ho we adapt to our environment. This blueprint makes the human species probably the most adaptable of all the species on the earth because we live in more environments than any other species

When you’re giving a talk about precision wellness, what are the main items that you want to get across to the people during a time in which there there's a lot of questions?

That's an environment that changes for physicians, and the environment could be anything from the weather to the air we breathe to the food we eat. It's what affects, directly or indirectly, our body and cells. COVID is obviously a virus that affects us, and interestingly from the genome, there's new knowledge that became available about two months ago. Thirteen percent of COVID mortality can be explained by two genes, and they only studied 20 genes out of the genome because they didn't have large enough population to do that. They had the opportunity to have a million markers in the genome but could only look into a subset because otherwise there's a problem called the curse of dimensionality. When you have too much data, you make a million hypotheses, and you need to control for that because there's always a risk of what we call a false positive. There’s always a give and take.

You use technology and bioinformatics to understand individualized disease treatment, so what does the power of a computer allow you to do that wouldn't be possible at the bench or in the clinic?

There are so many places where it can help: simply to assemble the genome and to verify what's normal or abnormal in that genome of someone. When you’re looking at the transcriptome, a computer is required because there's far too many calculations to be done by hand again - we're speaking of taking billions of little parts and assembling them and verifying what looks common and uncommon.

Assessing disease of the human genome also requires computers, because it would be too laborious to do by hand for each individual. If we go back just 10 years, with customer being a single individual, the assembly would cost thousands of dollars, but with advanced technology, the price reduces rapidly.

We're really at the crux of another technological revolution. Remember, we're still part of the digital revolution, and so in the digital age with machine learning, and there are other tools that can help find patterns or conditions in imaging or in the genomes when you have large preparations to test that to against. That's yet another way in which technology comes in, but most important to you when it's time to deliver the care just in time in the presence of the patient.

There are a lot of characterizations that can be done on a patient as they arrive at their clinic, much more than the human to human, working on the humanity part of the relationship of the patient while some of these calculations are done ahead of time

Traditional groups are designed to find averages. A good example for that would be for propranolol - a drug against hypertension - which 30 years ago, when I was in med school was under patent at that time. The studies hadn't been done in white Caucasian males, and as I came out of my residency, it would only work in 50% of females. As they did these additional studies, that led the National Institute of Health to require that every clinical trial has males, females, if need be, children, and diversity - Hispanics, African American, Asians, et cetera - not just people from one continent. They found African American males were only 30% responsive to this, and so the benefit with the right precision test is that we'd be able to help determine whether they might be responsive.

My team has been developing techniques called single-subject studies in which you can take a tissue like blood or skin and do a test out of the body. We call that ex vivo or in vitro testing. We compare that to a control that's not affected. With our collaborators, like Dr. Fernando Martinez, for example, we're able to predict which children among severe asthmatic children would be hospitalized in the coming year for a severe exacerbation of their asthma. Then we can treat them with a drug to prevent crisis. It’s important to note that these differences would not have been seen at the organ level – they had to be seen in the blood.

The advantage of these types of studies is that we could test the transcriptome and learn a classifier with machine learning, artificial intelligence. These types of studies are not so expensive to develop. Our team, for example, has repositioned and rescued drugs from some 15 years ago, using computations, and verified that in vitro and in animals, and then through clinical trials. Altogether, it was probably a cost of about $500,000, and it's worked to save lives while the traditional cost of making sure a drug is safe for the market will cost over a hundred million dollars. Computers made a difference because that drug was safe. It was just ineffective in its original purpose.